Like life in general here, getting about on our roads and streets has gone haywire. Motoring costs have soared, lives are in danger every moment, the frustrated public psyche is to drive hell-for -leather, potholes notwithstanding, and police threaten drivers at roadblocks everywhere. 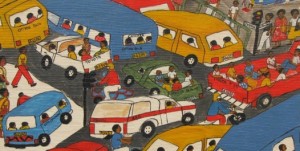 Admirable Weya art from Chiendambuya outside Rusape on traffic congestion.

Five checkpoints on a six kilometre stretch in the once-thriving industrial district on a Friday make up the driverâ€™s mantra: â€œah-ha, money for weekend!â€ in spurious on-the-spot traffic fines. Fuel prices go down with the world oil glut and up again to bring in more excise duty for the broke government. Regular motor spares are hard to get because dealers donâ€™t have the capital reserves to hold enough in stock.

The city centre is a helter-skelter of crazed Â kombis â€“ commuter minibuses â€“ driving at break-neck speed, hooting, their touts yelling out for fares while hanging precariously out of the doors and then there are countless pirate communal taxis, usually small reconditioned Japanese imports called Â â€œmakishikishi,â€ all of them stopping anywhere without warning.

Apologists say the traffic mayhem and the rush hour jams are an indicator of economic recovery. Wrong. Itâ€™s about disregard for the law and everyone desperately trying to chase the sameÂ scarce buck.

Lagos and Nairobi-style driving, congestion and higgeldypiggeldy parking have arrived in Harare. In â€œclamping zonesâ€ a wheel can be unclamped for a $20 bribe, a third of the fine, with no ticket.

A small yellow or orange rimmed spare wheel is commonly known as â€œa biscuit.â€ The most spurious scam for a fine: the checkpoint police say the biscuit is illegal. All five tyres must be the same size, even if the biscuit is tucked neatly away in the place designed for it during random roadworthiness checks. The biscuit is the standard â€“ and legal â€“ spare on some makes of car. Arguing the point can take a long time. Well, letâ€™s go to court then. â€œWe donâ€™t have the right summons book here.â€

What the hell, pay up and ask the police why they are not stopping unroadworthy, poorly maintained kombis cutting recklessly across verges and pavements, ignoring road signs, swerving Â into the front of a right-turning lane, committing other flagrant fast moving traffic offences â€“ Â  and not least, killing people in horrific numbers each year from speeding, overloading, tyre bursts and metal fatigue that shears off drive shafts, wheel mountings and suspension rods. Twenty six passengers can easily be crammed into a 16-seater. Many drivers are under age or not properly licenced for a PSV â€“ public service vehicle. A witness in an accident case described one kombiâ€™s tyres as â€œas smooth as a snakeâ€™s belly.â€

And what about theÂ police concentrating more onÂ crime, by the way? Â â€œWe are ZRP Traffic.â€

Solution? None. If you must visitÂ downtown, donâ€™t take your own car; catch a kombi or a makishikishi if you dare. Itâ€™s chaos down there.