Jackals are wreaking havoc in Shurugwi and surrounding villages in ward 21 where they are terrorising villagers and killing livestock. 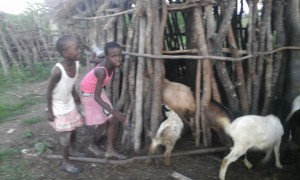 Angry villagers claim that the marauding jackals have killed more than 23 goats in the neighbourhood. Attacks by jackals, that are always lived and hunted in the area, seem to have intensified of late and an increase in livestock deaths has been observed in six villages.

Farmer, Lizzy Dube (87) told this reporter that the wild animals were causing villagers sleepless nights as they struggle to protect their livestock. Dube added that many people are now afraid of jackals and that they are disturbing farming activities.

â€œJackals have become a menace.Â  Our family has lost six goats. This is the first time that we have experienced jackal attacks on our livestock since we were resettled here in 1983. Jackals were here in high numbers all these years, but have never gave us problems. What surprises us most is the fact that the wild animals attack our live stock in the afternoon. We are desperate and hope that government willÂ  intervene. We appeal to the Wildlife Management Department to help us save our livestock before it is too late,â€ said a troubled Dube.

Another elderly farmer, Rein Ndlovu echoed her sentiments, adding that despite efforts to protect his livestock by accompanying goats to their grazing land, the jackals still managed to snatch and kill goats and domestic animals, including dogs.

â€œWe have tried our best, but in vain, as many goats and several dogs have so far been killed. We are appealing to the Wildlife Authority to step in and help us track these animals or relocate them to save the few animals that remain,â€ said Ndlovu.

Kimberly ‘Capetown’ Mangena commented that the biggest challenge was that the jackals were only heard at night and that very few people had actually seen them during the day.

â€œThe jackals are terrorising village one, two, four and six of Dorset, village one of Zhaugwe and Matshabela in village seven extension. The problem has been compounded by the fact that the smaller wild animals that the jackals used to hunt and prey on are no longer available to them. These have been poached by locals and by the Police force’s neighbourhood watch committee members who take advantages of their authority,â€said Mangena.

He added that some farmers were even prepared to bring their livestock indoors to sleep in the same house for fear of losing their entire goat herd.Â Mangena also expressed fear that hunger may drive jackals to attack humans if nothing is done soon to remedy the problem. However, he assured this reporter that efforts have been made to inform wildlife management.

Although all efforts to contact Zimbabwe Parks and Wildlife Management Authority (ZPWMA), spokesperson, Caloline Washaya Moyo were in vain at the time of submitting this article, this reporter will keep readers updated on the jackal situation.