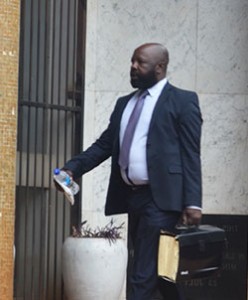 Kereke is accused of raping and indecently assaulting his nieces in 2010 but denies the charges, alleging a conspiracy to punish him for exposing grand corruption at the Reserve Bank of Zimbabwe (RBZ) where he once worked as advisor to former governor, Gideon Gono.

The legislator claims that Gono, who fired him from the central bank, looted millions of dollars in State funds from the apex financial institution.

On Tuesday Kereke took the whole day narrating how ministers, traditional chiefs, intelligence bosses and journalists helped concoct the rape allegations against him.

He said after he reported the multi-million-dollar corruption at RBZ, Gono went on to silence anti-corruption commission bosses by buying mansions for them in Harare.

â€œThe houses were registered under their (beneficiariesâ€™) shelf companies and they were each given $US10,000 holiday allowances. When I reported the case, it became an issue against me.â€

Kereke said the rape case was politically motivated, adding that even cabinet ministers extorted money from, claiming they would, if paid, tell him who triggered the allegations against him.

He went on to implicate then ICT minister, Webster Shamu, Simon Khaya Moyo and the former Vice President, Joice Mujuru.

Regarding Shamu, Kereke said the former cabinet minister demanded and was paid $US2,000 after claiming he could reveal the source of the rape conspiracy.

â€œOnce the seed of falsehood was planted in the alleged victimsâ€™ mind and reported, other political vultures joined the band wagon,â€ said the MP.

â€œI recall Shamu coming to me demanding $US2,000 so that he could tell me where the rape allegations were coming from. I reported the case (to the police) and a trap was set.

â€œI worked with intelligence director Mudahondo and we used marked notes. We drove to Shamuâ€™s place of residence and everything was captured (on video).

â€œThe case is known to all government officials up to the highest office but itâ€™s still outstanding.â€

Kereke then went on to narrate the involvement in the rape allegations of former Zanu PF legislator businessman, David Butau, adding that he was close to Mujuru and Gono.

He said Butau co-owned Dande Capital Holdings with Mujuru and was also close to the mother of the rape victims to the extent they once co-habited.

Kereke told court that Gono then stole Â£450,000 from the central bank and gave it to Butau.

â€œThe money was supposed to buy tractors and agricultural equipment but Gono ordered Butau to buy foreign currency. However, Butau knew this was corruption and refused to return the money,â€ he said.

According Kereke, Gono became angry and fabricated externalisation charges against Butau who subsequently fled the country into exile.

Kereke told court he helped prove that allegations against Butau were false and charges against the latter were dropped in a development that however, further infuriated Gono.

However, before Gono and Butauâ€™s relationship soured, court heard Butau told the RBZ chief that Kereke occasionally took custody of the girls at the centre of the rape trial.

Armed with this information, Gono then went on to fabricate rape allegations against Kereke.

Kereke claimed that the girlsâ€™ mother confided in Butau that the rape allegations were false. This was disclosed to Kereke after he fought for Butauâ€™s acquittal on the externalisation charges. Kereke claimed Butau even apologised for having kept this a secret from him.

However, the private prosecutor Charles Warara objected to this testimony after Kereke attempted to tender a message transcript between him and Butau saying the latter was not a witness in this case.

Kereke went on to tell the court that Mujuru held a meeting with chiefs from his constituency including in a bid to bar him from contesting elections but the bid flopped after he approached the Constitutional Court.

Again, prosecutor Warara objected saying Kereke was turning the court into a Zanu PF rally and running away from allegations against him. This was after the MPâ€™s second attempt to tender minutes from the meeting Mujuru allegedly held with the chiefs.

The magistrate again ruled in favour of Warara saying corroboration was not allowed at law. He told Kereke that an accused cannot generate his own documents and produce them in court.

Magistrate Mupeiwa said only the person who compiled the notes was allowed to bring them before the court or testify to support Kereke allegations.

Kereke also went on to cite Parirenyatwa hospital CEO, Tafadzwa Zigora, and the hospitalâ€™s director of operations, one Mundenda, saying they denied ever handling or examining the victims at their institutions.

He said this meant that the doctor who allegedly examined the girls lied under oath in court, adding that the medical officerâ€™s findings or confirmation that the girl was raped could, therefore, be accepted as evidence.