GWERU mayor Hamutendi Kombayi and 10 councillors have filed a chamber application at the Bulawayo High Court seeking to block a Supreme Court appeal by Local Government minister, Saviour Kasukuwere who is challenging their (councillors) reinstatement. 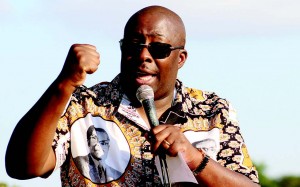 In February this year, High Court judge, Justice Francis Bere, ordered the reinstatement of the 11 councillors, saying their suspension on alleged abuse of office was “null and void.”

The councillors had been suspended in August last year.

â€œI submit that there is no appeal to talk about. All the respondents have exhibited a clear propensity to frustrate us as applicants to enjoy the judgment of this honorable court delivered on February 22, 2016,â€ Kombayi said in his founding affidavit.

Kasukuwere, Midlands provincial administrator, Cecilia Chitiyo, and the three member tribunal who were supposed to preside over the councillors hearings, Luckson Chikumbirike, Goodwill Khosa and Nicholas Moyo are cited as respondents.

The respondents through the Civil Division of the Attorney General’s office are arguing that the High Court misdirected itself in its judgement as it failed to take into account the public interest in the matter.