MDC-T UK chapter have said the demonstration to demand an explanation on the missing $15 billion from diamond revenue will go ahead in central London this Thursday. 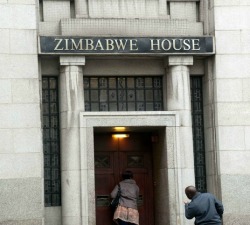 This comes after the security servicesâ€™ Joint Operations Command (JOC) last week forced the MDC-T in Zimbabwe to move their march from April 7 to April 14, saying it clashed with President Robert Mugabeâ€™s meeting with the war veterans.

Mugabe recently admitted to corruption in the diamond mining sector, revealing that as much as $15 billion was unaccounted for. A statement from the MDC-T London implicated Mugabe because of â€œpersonal allocation of mining rights to companies which had no history of mining and some of them briefcase companies formed by military officers and registered offshoreâ€.

MDC-T London branch organising secretary, Sharon Moyo, urged people to assemble at the Zimbabwean Embassy, near Trafalgar Square (429 The Strand) by 11am as the allocated demo time was only between 11 and 1pm on Thursday.

She said the London demo has been organised in solidarity with the Zimbabwe march which will be held on April 14. According to her, Jeff Sango and Tonderai Samanyanga will address the people outside Zimbabwe House.

â€œWe want to highlight to the international community what a corrupt government we have in Zimbabwe which can make $15 billion disappear through corruption yet people are suffering without basic amenities and living on less than a dollar per day,â€ said Moyo.

She urged members to make posters demanding â€œour $15 billion, and denouncing corruption and then calling for the resignation of Mugabe’s governmentâ€.

Moyo said they wanted the â€œBritish government to realise that in Harare right now there is no government to do business with as Zanu PF is mired in an explosive power struggle with potential to explode into a civil warâ€.

â€œThe international community should be watching carefully what is going on in Zimbabwe and supporting the MDC-T which is the only organised political party with supporters on the ground, and a program for democratic governance,â€ she said.

Meanwhile, the MDC-T Zimbabwe, which has dubbed the planned demo as â€œmother of all mass demonstrationsâ€ says all the logistics are in place for the Harare march.

According to reports, party spokesperson Obert Gutu said all was set for the forthcoming march.