BULAWAYO â€” As the nation commemorates the countryâ€™s 36th independence anniversary, perhaps the most preoccupying issue on the minds of many ordinary Zimbabweans is how their beloved motherland has regressed from being the bread basket of the sub region, to a basket case in which many are finding it difficult to put food on the table. 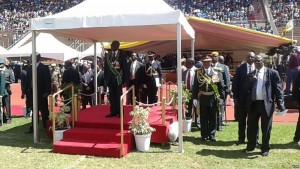 President Mugabe seen at the National Sports Stadium in Harare on Monday.

Zimbabweâ€™s war of independence was waged on the basis of getting rid of an unjust racist government, restoring human dignity and justice or equality before the law for everyone, among other issues.

Equal access to land and the right to vote were also paramount, and with the countryâ€™s attainment of independence on April 18th 1980, most ordinary people believed that their hopes for a better life were going to become a reality in the new nation, christened â€œthe Jewel of Africa,â€ by the late Tanzanian president Julius Nyerere.

Zapu leader Dumiso Dabengwa says ordinary people are in despair because the expectations that they had about the kind of life they would enjoy in an independent Zimbabwe, have been frustrated, turning independence day into a charade.

Dabengwa, who revived Zapu in 2008 after disgruntlement over the 1987 Unity Accord between Zanu PF and Zapu, says this is largely because the countryâ€™s leaders that led the armed struggle against colonial rule, have forgotten the values upon which the war was fought.

â€œWhen the liberation war was waged, the people had their values; they had their expectations and most of those expectations have not been realized. We are clearly making a farce of this important day. It should be a day when we should be reflecting on our gains and challenges, and yet we have very little to celebrate.â€

At independence, the then Prime Minister Robert Mugabe, pronounced a policy of reconciliation, which the world hailed as providing for an auspicious start for the new nation.

But Dabengwa, a former intelligence supremo of ZIPRA, Zapuâ€™s armed wing, says part of the countryâ€™s current situation emanates from a lingering mistrust between the nationalist leaders adding that this culminated in the civil strife in which an estimated 20,000 civilians -mostly supporters of Zapu – were killed by a crack army unit, Five Brigade.

He says, â€œThe focus failed to respond to the values and expectations of the people of Zimbabwe right from the beginning. The issue of suspicions against each other; the mistrust that was reflected by government, all those made the people fail to achieve the goals they had set themselves to achieve.â€

Veteran nationalist Cephas Msipa, one of the few former senior Zapu members alive, agrees that Zimbabweâ€™s problems are mainly as a result of the discarding of liberation war ideals.

In 1980, the new Zanu PF government, which espoused a socialist orientation, started on a path of social equity, providing free education and health care for all.

In the early years of independence, the ruling Zanu PF party gave titles to each year, to reflect national targets that the government would focus on – in the fashion of the Chinese Communist Party – with 1980 being declared â€œthe year of the peopleâ€™s powerâ€ and 1981, â€œthe year of national transformation.â€

But some observers have opined that all this was meant to beguile the masses, while the ruling eliteâ€™s real intention was accumulation of wealth and consolidation of power, as evidenced by Zanu PFâ€™s push for a one-party state in the late 80s.

In 1984 the ruling party had adopted a leadership code, which required senior leaders to declare their assets, prohibiting them from accumulating property. The code was later abandoned as most of the leaders openly became businessmen.

Msipa says part of the countryâ€™s problems are because a number of nationalist leaders became obsessed with power and its trappings.

â€œPower corrupts and as it is said, absolute power corrupts absolutely. We got corrupted by power and then we forgot what the struggle was all about. We think it was about getting into positions, you know, replacing whites with blacks, forgetting what the values of the struggle were.â€ 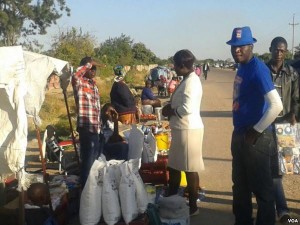 Many people have become vendors due to the harsh economic situation in Zimbabwe.

Government adopted the first of its national five-year plan initiatives – aimed at spelling out economic policy- in 1986, ending in 1991.

From independence to date, the Zimbabwean government has come up with numerous economic blueprints, with general consensus being that although the plans are brilliant on paper, lack of proper follow-through on one hand, and adoption of discordant policies on the other hand, have resulted in the failure of the policies.

Butler Tambo of the Public Policy Research Institute of Zimbabwe agrees that policy inconsistencies and a knee-jerk sort of reaction to issues of national importance, have contributed to the current problems.

But Tambo traces Zimbabweâ€™s current problems back to the Rhodesian governmentâ€™s Unilateral Declaration of Independence in 1965 and the subsequent international economic sanctions against the regime.

Tambo says although the import substitution policy helped keep Rhodesiaâ€™s economy ticking, it did not grow much. When the nationalist government took over in 1980, its pro-poor policies meant supporting millions with an economic base which had hitherto been skewed in favour of a minority.

Tambo says the current industrial decline is a result of the fact that the majority government did not invest in industrial growth after independence.

He says, â€œThe obsolete equipment that we are finding in the industries is courtesy of the fact that equipment was last bought in the 1950s and 60s. Soon after independence we relaxed on buying new equipment for industry. Issues to do with electricity for instance â€“the only electricity plant that was put up was in 1987, which is theHwange Power Station.

â€œBut any developing country or a country which is serious about industrialization is supposed to come up with a new power plant at least after every five years. So that has caused us to be in this current mess where we have power outages and so forth.â€

Like other observers Tambo also notes that corruption and governmentâ€™s apparent failure to take decisive steps to curb it, have also contributed to the countryâ€™s problems.

Writing on his blog, lawyer and analyst Alex Magaisa, says the Lancaster House Agreement on which the new nation was built provided for a weak foundation mainly because in the early years it allowed for the continuation of racial discrimination and also left the land question unresolved.

Magaisa says some of the countryâ€™s problems in recent years can arguably be traced to the agreement.

Reginald Shoko, Matabeleland region president of the Affirmative Action Group says for Zimbabwe to get out of its multi-faceted or intertwined problems, there is need to desist from policy discord as well as political squabbles and adopt the ideal of self-sacrifice, which was shown by liberation fighters in the fight for the countryâ€™sindependence.

â€œTo come out of this mess we need to pull together in one direction. We have to take a few pains just like those who fought wars to solve these problems â€“ a social contract between government, industry, labour and civil society because at the moment we are a nation that is not knowing where it is going. Some arepreaching the Mugabe-must-go mantra, and others are crying

â€œSanctions!â€ So we need to sit down as a people, as Zimbabweans and find ways to go forward.â€

There may be no agreement on how Zimbabwe got into its current situation but that the country is facing serious social, economic and political problems is not debatable.