PRESIDENT Robert Mugabeâ€™s health continues to be on the spotlight after a picture in the official press showed aides helping the 92 year old leader as he was bending over to greet mourners at a funeral. 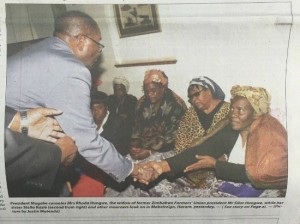 Analysts said either his aides were clipping his arms to prevent him from falling on top of mourners or propping his failing hand.

Mugabe was at a funeral for former Zimbabwe Farmersâ€™ Union president, Silas Hungwe, who died of a long illness at the age of 91.

The oldest leader in the world is accused of clinging to power even when he was showing clear signs of poor health and fatigue.

Mugabe, however, is adamant he was still â€œas fit as a fiddleâ€ and was able to see off his current term and even contest for a fresh mandate in 2018.

He has since increased his visits to Singapore where he is receiving medical treatment for an undisclosed ailment.

While he has managed to camouflage his poor health through constant appearances at public gatherings and delivering long speeches, the last 13 months have exposed him.

Last year, Mugabe tumbled on a carpet in front of his supporters at the airport.

His publicists were at pains to dismiss the mishap as a fortuitous incident which did not warrant the amount of excitement it generated among Zimbabweans on social media.

The Zimbabwean leader was last month pictured dosing off while being hosted by Japanese Prime Minister d Prime Minister Shinzo Abe during a state visit.

After his images went viral on social media, Information Minister, Chris Mushohwe, was quick to tell the media Mugabe was nodding as opposed to falling asleep.

Mushohwe went on to caution journalists to respect the state president by refraining from cooking up things about him.

Ahead of that, Indian PM Narendra Modi helped Mugabe break his fall during a visit to the Asian country. Modi was shown on TV stepping forward to help Mugabe up the rostrum after the Zimbabwean strongman tumbled.

Before that, a picture went viral showing Mugabe walking down the airstair with members of the close security unit watching his steps closely clearly alert to avert another fall.

As recent as two weeks ago, Mugabe was shown on TV appearing to beÂ  bowing to his own image in what observers thought was either a clear case of narcissism or sign of old age.