FOLLOWING my instalment last week in which I addressed the allegations of looting the war victims compensation fund, the Chiadzwa diamonds and the alleged complicity to political violence by Dr Joice Mujuru during her stint in Zanu-PF, I got several requests by readers that I address the alleged role that Dr Mujuru played in â€˜denyingâ€™ businessman Strive Masiyiwa a licence to operate a cellular phone network. 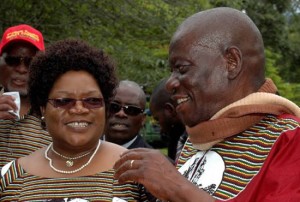 The allegations against Dr Mujuru are that she, somehow, influenced government decision to award the licence to Telecel Zimbabwe (Pvt) Ltd because the person who fronted the Telecel bid, James Makamba, comes from the same province as her.

This allegation is based on pure ignorance on how the saga around the tender for Zimbabweâ€™s second cellular phone network punned out in as much as it has a limited appreciation of the relationship between Makamba, Mujuru and Masiyiwa.

The second issue that comes out seems to suggest that there was bad blood between Mujuru and Masiyiwa and for this reason Mujuru remained intransigent and insisted that Masiyiwa would not get the licence.

Very few people know that it is, in fact, Mujuru who provided Masiyiwa with his first government contract when she awarded his company called Retrofit the contract to electrify Nembudziya Post Office in Gokwe.

It is also a fact that the decision that Zimbabwe was supposed to only have two mobile cellular networks was not a Mujuru decision but a cabinet resolution based on a technical report which Mujuru alleges did not give plausible reasons as to why the country was to have two cellular phone operators not three.

In just the same way, the decision to award the tender for running Zimbabweâ€™s second cellular network to Telecel was not reached by Mujuru unilaterally but by a government tender board housed in the Ministry of Finance not Information, Posts and Telecommunications where she was minister.

Those who followed the saga would agree with me that Mujuru actually concurred with Masiyiwa that there were irregularities in the way the tender was handled by the Tender Board but differed with the businessman on how the irregularities could be rectified.

Mujuru insisted that the process could be rectified by instructing the Ministry of Finance to constitute a new tender board to re-adjudicate the bids while Masiyiwa insisted that because there were irregularities in the way the tender board handled the bids, the court, on that basis, was supposed to award his company, Enhanced Communications Network (Pvt) Ltd, the tender to run the second cellular network.

The Herald of 5 June 1997, under a headline â€œI wonâ€™t contest order over cellphone tenderâ€ reported that the then Minister of Posts and Telecommunications, Joice Mujuru, was not going to â€œcontest a court order setting aside the award of the tender for Zimbabweâ€™s second cellular phone network to Telecel Zimbabwe (Pvt) Ltdâ€ but â€œshe wants the proposed new Government Tender Board to re-adjudicate the tendersâ€.

Mujuru conceded that true to Masiyiwaâ€™s observations, â€œthe Supreme Court laid down procedures for the tenderâ€ were not adhered to and therefore the â€œtender process had been deficientâ€ and that this was â€œthe fault of the Tender Boardâ€ hence â€œthe tenders should be re-evaluated by a new Tender Boardâ€ that the Ministry of Finance was then putting in place.

It was Mujuruâ€™s argument then that â€œthe High Court should not consider awarding a licence to Econet without referring the whole matter to trial so that the â€˜many serious disputesâ€™ in Econetâ€™s statements could be put to test.â€ Mujuru wanted an adherence to the rule of law and due legal processes to be followed before the court could award Masiyiwa the tender.

Her preference to have the bids subjected to re-adjudication was on the understanding that this was a quicker way of resolving the saga. She, however, insisted that the option of going to court remained open for Econet arguing that â€œIf the court thought the new board was unsatisfactory, then it could make its own order, after hearing the evidence (and determine) who should have the licence.â€

Never at any point, during the tender process, did Mujuru make deliberate efforts to determine the outcome of the process. She, rather, insisted that the laid down tender processes were supposed to be followed as demanded by the Supreme Court which had come up with the procedures. When Econet successfully challenged the tender process she concurred with the companyâ€™s observations and recommended that the bids be re-adjudicated by a new tender board.

Apart from the Econet licence saga, Mujuru is alleged to have been in the habit of soliciting 10 per cent bribes from companies. This allegation was popularised by First Lady Grace Mugabe with the help of seven hired Zanu PF provincial youth leaders who recently confessed in an interview with a South African based television station ANN7, that this was a lie concocted and shoved upon them by President Robert Mugabe after he had bought them slim fitting suits and paid them $3,000 dollars each.

However, like the Chiadzwa diamond allegations, the Dr 10 per cent allegation had a genesis totally divorced from any criminal intentions. Mujuru, after making a very splendid presentation on the potential business that Zimbabwe could do with Ras Al Khaimah, one of the seven Emirates that make the United Arab Emirates (UAE), the Sheik of Ras Al Khaimah, at a banquet held for the former Vice President, announced that he had â€œgiven Joice 10 per cent of our GDP to finance imports from her country.â€

The deal involved the identification of around 300 hundred local farmers that the government, through a loan from Ras Al Khaimah, would buy irrigation equipment and tractors so that they could grow horticulture products for export to the Emirate.

But when Mugabe felt he was â€œunder siege from Mujuruâ€ as Godfrey Tsenengamu puts it in the ANN7 interview, he chose to bastardise an otherwise clean deal that Mujuru had gotten for the country in order to malign his former deputyâ€™s character and dent her chances of challenging him at the elective congress that was slated for December 2014.

So many untrue things have been said about Mujuru and they are not limited to allegations of economic crimes. Her detractors have mastered even the art of voyeurism. They have designed very huge, but opaque, binoculars through which they peep into her domestic life in the hope of finding material to use for attacking Mujuru the â€œMother of Zimbabweâ€ through denigrating â€œMujuru, General Solomon Mujuruâ€™s wifeâ€.

Of late, whenever, Dr Mujuruâ€™s party hogs the limelight, whether through well attended constituency rallies or a policy pronouncement, some sections of the state media rush to recycle untrue stories about her alleged hardheartedness in dealing with contrived children of Gen Mujuru and his â€˜second wifeâ€™.

What is interesting is that the state media unashamedly chides Dr Mujuru for being inconsiderate to the so-called â€˜second wifeâ€™ of General Mujuru when Joice Teurai Ropa Mugari and Rex Nhongo (General Mujuru) on 02 April 1982, under Marriage Act (Chapter 37) certificate Number 148 of 1982, solemnised their union under a monogamous marriage Act which criminalises marrying a second wife.

Rather than chide the so-called second wife as a home-wrecker, a concubine and adulterer, they elevate her to the level of a second wife with â€˜a rightâ€™ to the late Generalâ€™s estate. Instead of applauding Dr Mujuru for not being litigious and quick to sue the woman for adultery, the state media accuse her of not feeling for a woman, who, if she was really in love with General Mujuru, is nothing but a shameless adulterer, gold-digger and a social pervert not qualified to earn even a penny for her shameless hobnobbing with married men.

Mujuru the mother is also being unfairly attacked for not caring for the so-called 20 children that General Mujuru is alleged to have sired out of wedlock even if some of them, at 20 years of age, only got birth certificates in 2014 without the assistance of any relative of their supposed father and in the absence of their fatherâ€™s death certificate. It is a scandal, but a scandal with state players that is aimed at getting at Mujuru the mother of the country.

The accusations and negative media spins around Mujuru will never recede as long as her political star continues to shine brighter and brighter. As we move towards the elections in 2018 and with Zanu PF as old and fragile as its 92 year-old centre of power, the attempts at soiling Mujuruâ€™s reputation are going to grow louder and even more desperate and silly.

NB: Next week, I will address the allegations that Mujuru did nothing for women as minister of government and as Vice President.