Kwekwe based human rights defender and writer Nkosilathi Moyo Snr, who is also former Chairperson of Crisis in Zimbabwe Coalition (CIZC) Youth Committee, has fled the country amid fears of being kidnapped by alleged State security agents. 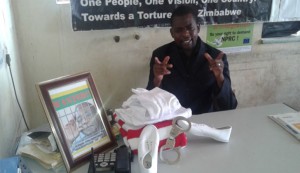 Early this year, Moyo sent a prison uniform and handcuffs to President Robert Gabriel Mugabe ahead of the Zanu (PF) leaderâ€™s 92nd birthday.

Moyo sent the present to the office of the President though DHL Kwekwe (Tracking Number 2220952661). The present also had a portrait inscribed ‘Wanted-R.G Mugabe for Crimes Against Humanity’.

President Mugabe is accused of gross human rights violations and mismanaging the economy for the past 36 years.

In a video message released on 27 January 2016, Nkosilathi Moyo said: ‘I have sent a birthday present to President Robert Mugabe today and I wish him well on his 92nd birthday scheduled for the 21st of February. The gift is comprised of a prison uniform, handcuffs and a portrait written WANTED-R.G MUGABE; FOR CRIMES AGAINST HUMANITY’.

â€˜I feel the President must be brought to justice one day for crimes against humanity and gross human rights violations committed by his ZANU PF government for the past three and half decades that they have been in power. So with this gift I say Happy Birthday in advance President Mugabe and bear in mind that one day justice will prevail on this land. The present will be delivered at the President’s office tomorrow morning.â€™
Since then suspected members of the CIO visited his offices frequently demanding to know his whereabouts prompting him to seek asylum outside the country.

Moyoâ€™s ordeal is similar to that of Gertrude Hambira, the former Secretary General of the General Agricultural and Plantation Workers Union of Zimbabwe (GAPWUZ) who in 2010 was forced into hiding following fears of being kidnapped by the State.

On 09 March 2015 Itai Dzamara went missing after sending a petition to President Robert Mugabe urging him to step down from power following years of mis-governance and a tainted human rights record.

According to Zimbabweâ€™s Constitution, the country is founded on the respect for the Supreme Charter, the rule of law, fundamental human rights and freedoms and the recognition of the inherent dignity and worth of each human being. Section 2 of the Constitution states that â€œthe obligations imposed by this constitution are binding on every person, natural or juristic, including the State and all executive, legislative and judicial institutions and agencies of government at every level, and must be fulfilled by themâ€.

CIZC is concerned with the ongoing purge on Nkosilathi Moyo and other human rights activists and reiterates that citizens have the right to petition and hold public officials to account. The purging on Nkosilathi in our view represents a closure of democratic space. We stand in solidarity with our member Nkosilathi Moyo and his family and urge the GoZ to respect individual freedoms guaranteed by the constitution.