... amid uproar from participants over failure by the Thematic Committees to avail NPRC Bills in advance. 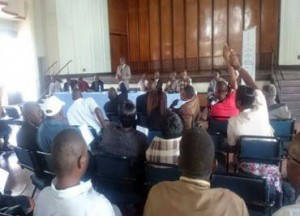 Part of the proceedings during the Mutare Meeting.

The Parliament of Zimbabwe conducted a National Peace and Reconciliation Commission (NPRC) Bill public hearing in Mutare, the only consultative platform for Manicaland Province. Approximately 150 people attended the meeting. The hearings are part of the National Assemblyâ€™s public consultations on â€˜the national healing and reconciliation legislation.â€™ Other four hearings have been conducted already in Kwekwe, Gweru, Gutu and Masvingo urban. The countrywide consultations are taking place between 11th & 20th of April 2016.

The public hearing in Mutare commenced with tension as Senator Mumvuri refused to summarise the NPRC Bill to members of the public present. He argued that responsible members of Parliament should have done so prior to the meeting. However, the friction was fixed when Hon. Gonese summarised the Bill. It is HZT ‘s contention that the Members of Parliament leading public consultations on the NPRC should allow communities to understand the contents of the Bill before soliciting their views. The public has the right to adequate information and knowledge in order for them to make meaningful contributions to this important legislation.

There were candid contributions from the people. Some of the contributions that dominated public views regarding the Bill are that;