The Zimbabwe Vigil salutes our sister organization the Restoration of Human Rights in Zimbabwe (ROHR) for its participation in the brave MDC T demonstration on Thursday against Mugabeâ€™s rapacious regime. We are to join ROHR outside the Zimbabwe Embassy in London on Friday 15th April to support their â€˜Mugabe must goâ€™ protest. 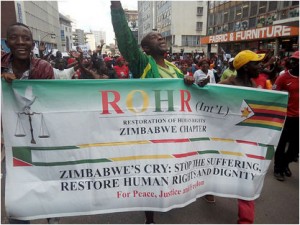 We have a constitutional right to protest and are grateful that the courts have dismissed the police attempts to close down all demonstrations. We must have demonstrations every day in Zimbabwe if we are to free ourselves of this barren regime.

We must challenge the great geriatric: come and commune with us on the streets. Tell us what you have done with our $15 billion.

Here is a report from ROHR Programmes Co-ordinator who attended the demo today.

Â An estimated 8,000 people today thronged the streets of Harare in a march organised by the main opposition party MDC T and other civic organisations and well-wishers taking part to voice their concerns on the missing $15 billion, unemployment, abductions and the general economic decay.

The march started at Freedom Square behind the Sheraton Hotel with the organizing secretary Mwonzora giving orders. The procession started when Tsvangirai arrived and people burst into songs waving placards with various messages directed to the Mugabe Regime. People jostled as they walked on the jammed streets. Police were deployed at every street corner wielding baton sticks and teargas canisters. Uncharacteristically today allowed the people to exercise their democratic right as enshrined in the constitution of Zimbabwe Section 59.

The crowd congregated at Africa Unity Square which was surrounded by anti-riot police armed to the teeth. Morgan Tsvangirai addressed the crowd. He spoke of the failure by the regime to address bread and butter issues, corruption and oppression and promised a new hope for Zimbabwe. After the address people dispersed singing revolutionary songs.