BIKITA WEST MP, Munyaradzi Kereke, who has tried to fight prosecution for alleged rape and indecent charges for over five years, Tuesday sought to have the trial adjourned while awaiting indefinite phone records from Telecel Zimbabwe. 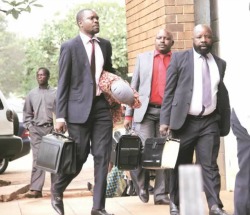 Kerekeâ€™s lawyer, Erum Mutandiro, told court that they had approached the service provider who told them the records could take time to be produced or may never be found since they have been long archived in their IT system.

The phone records are of his two nieces, the ones he allegedly abused when they were 10 and 15 years old respectively back in 2010.

Kereke feels the records are of significance as they prove that the girls lied when they claimed that they had no access to communication with their close relatives in whom they could have confided.

Mutandiro also said they were told that due to change of persona at the company, it was difficult for the firm to track the person who archived the call records.

â€œThis is when the police obtained a court order while doing investigations. The official at Telecel who compiled the document is no longer available and the document has long been archived,â€ said Mutandiro.

â€œWe were told that to recover the document would mean an indefinite delay to the case. Enquiries at the Prosecutor General and police revealed that the call history was put in the docket but what was discovered from the private prosecutor does not cover the material time.

â€œAccused is in a serious dilemma and the court should direct the best way to have this critical and important evidence placed before the court.â€

The private prosecutor, Charles Warara, then objected to the application saying what the defence wanted was not clear.

â€œIs the defence asking for a specific relief? he queried.

â€œThe application puts prosecution in an awkward position on what to respond to. Defence appears to be seeking relief; the only problem is that he doesnâ€™t know how to say it. This rape case has been characterised by very long endless mischief so unusual in a criminal case. He delayed prosecution for nearly six years and itâ€™s unfair that he is now seeking to benefit from that delay. If he had operated as expected the call records could have been found. Now he is crying foul because of substantial evidence he could have sought long ago,â€ said Warara.

Then magistrate Noel Mupeiwa said he could not order the private prosecutor to hand over the full set of the call history because he did not have it.

â€œWhen trial started parties should have perused documents rather than wait for the defence case. Court cannot grant any directions as to how the call history makes its way before the court,â€ he said.

In an interesting turn of events, the troubled MP who was directing his client in every move was worried when prosecutor, Tinashe Makiya, wife to the lawyer he fired, James Makiya, conversed with Warara.

Kereke told court he felt their chat was prejudicial on his part.

However, Makiya said she was negotiating with Warara if he could briefly defer the trial so that she postponed another case which was to be heard before the same court.

The trial continued with Kereke constantly passing notes to his lawyer.

Warara objected to Kerekeâ€™s conduct, saying this must only be allowed if Mutandiro ceased to be a lawyer.

â€œAccused cannot assist his lawyer while he is testifying. He is the lawyer and that is his job. The lawyer cannot ask his client what documents to produce and what not to unless he ceases to be the lawyer,â€ said Warara.

Kereke is accused of raping his 10 year old niece in 2010. He is also on charges of grabbing buttocks and breasts of the other niece during the same year.

His trial became the first to be privately prosecuted after 5 years of averting his trial.

The MP was never arrested over the allegations.