THERE was a heavy presence of anti-riot police at the Zanu PF conference centre in Gweru on Thursday during a visit by the party's national political commissar Saviour Kasukuwere who was looking to calm tempers between warring factions in the province. 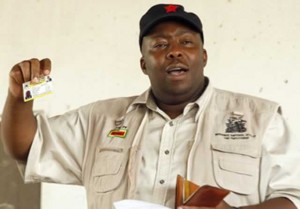 Kasukuwere believed to be aligned to the First Lady Grace Mugabe’s Generation 40 (G40) faction had been tasked by the Zanu PF politburo to mend divisions in the province between his G40 faction and Vice President Emmerson Mnangagwa’s allies.

In a conciliatory address to the Provincial Coordinating Committee (PCC) meeting just outside Gweru along the Mvuma road, Kasukuwere said there was need for unity of purpose in the province ahead of the 2018 elections.

“The 2018 elections are just by the corner and we can’t afford to continue fanning factionalism and divisions within the party,â€ Kasukuwere said.

Zanu PF politburo member and transport minister, Joram Gumbo was appointed the acting provincial chairman for three months, during which he was tasked with tackling the factionalism in the province.

“For the next three months comrade Gumbo would be acting chairman and the party expects that a lasting solution to the problems in the province will be found,” he said.

Addressing the PCC, Gumbo said the province should be allowed to deal with its problems without the interference of party members from outside (the province).

He said the votes of no confidence passed on party members from the rival factions had been nullified.

“Everyone will remain in their original positions expect for myself who would be acting chairman for the next three months,â€ Gumbo said.

“Let us learn to solve our problems as a province and not rush to expect those from outside will solve them for us.”