MORE than 200 Zimbabwean diaspora nationals marched outside the Zimabwean embassy on Thursday afternoon demanding their government to provide them with the right to vote in South Africa for the Zimbabwean elections. 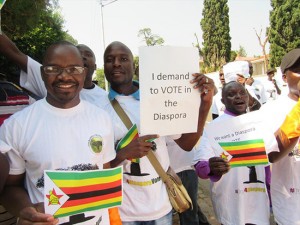 Zimbabwean People Firstâ€™s South African interim coordinator, Lawrence Mavhaire addressed the protesters and a representative from the embassy who informed the protesters the ambassador was unavailable.

The protesters were angry when they were told the ambassador would not to accept the memorandum.

â€œZimbabwe is our home but South Africa is our shelters. Our children are suffering back home. We are simply asking you to do what you are supposed to do,â€ Mavhaire said.

He discussed challenges of Zimbabweans who have to sleep overnight at the Marabastad home affairs offices for documentation and Zimbabwean women who are turned away from South African hospitals due to the lack of proper documentation.

â€œWe want the embassy to be the ones responsible for us registering and not burden the South African government with that. We are not in South Africa because we want to, but because the economic situation back home does not allow us to work,â€ Mavhaire said.

Lovemore Tendepi (32), a Zimbabwean national residing in Pretoria Central, said it was a problem for Zimbabweans living in South Africa to vote in the Zimbabwean elections.

â€œItâ€™s a process, you need to register in Zimbabwe first, then go back the next day to ensure that all your details are correct. Only then are you eligible to vote, you cannot do this when you are living in South Africa,â€ Tendepi explained.

He said it was too costly for him to travel to Zimbabwe because he would need money for transport, groceries, his family and at times extortion money at the border posts.

A representative from the embassy refused to provide his name and surname, said he would hand over the memorandum to the embassy and to the Zimbabwean government.

â€œI am not authorised to speak to the media. I will be handing over the memorandum to the Zimbabwean embassy and the government,â€ he said.

Should no response be given by the embassy, the Zimbabwean People First protesters would be back to protest again after 14 days, on 28 April.