His face is on money, his photograph hangs in every office in his realm, his ministers wear gold pins with tiny photographs of him on the lapels of their pinstriped tailored suits. He names streets, football stadiums, hospitals and universities after himself. He carries a silver inlaid ivory rungu or an ornately carved walking stick or a flywhisk or chiefly stool. 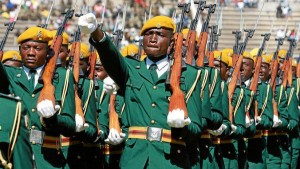 He insists on being called doctor or being the big elephant or the number one peasant or nice old man or the national miracle or the most popular leader in the world, his every pronouncement is reported on the first page. He shuffles ministers without warning, paralysing policy decisions as he undercuts pretenders to his throne. He scapegoats minorities to show up popular support. He bans all political parties except the one he controls. He rigs elections. He emasculates the courts and he cows the press, he stifles academia. He gives the church. The Big Manâ€™s off-the-cut remarks have the power of law. Read full report.Â  SECUROCRACY TO DEMOCRACY