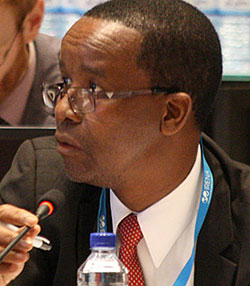 Mugabe, unsettled by Mujuru’s growing popularity within the party, was quick to dislodge his once trusted deputy in a fierce purge which also claimed the scalps of many loyalists.

Mujuru went on to form the Zimbabwe Peace First (ZimPF).

Since then, Mutezo has been a dead man walking with party members using public gatherings to lambast him for his temerity to join forces with Zanu PF enemies.

Mutezo did not help his cause either when he was spotted at a recent Mutare ZimPF rally which was also attended by former Zanu PF secretary for administration and now bitter Mugabe critic, Didymus Mutasa and Retired Brigadier Elliot Kasu, among others.

He said Mutezoâ€™s presence at a ZimPF meeting was a betrayal of their party.

â€œAs a province, we have written a petition to the party`s main wing recalling Mutezo because he has crossed the floor to join Mujuru,â€ said Undenge, who is also current energy minister.

He said Mutezo must be recalled and fired because it is Zanu PF which sponsored his election to become MP.

â€œIt is Zanu PF which nurtured him politically and to join Mujuru is a serious betrayal,â€ said Undenge.

Efforts to get a comment from Mutezo were fruitless as his mobile phone went unanswered.

However, party sources said Undenge has a keen interest in seeing Mutezoâ€™s back as his ouster would create a parliamentary vacancy for his wife, Letina Undenge, who is also a prominent party member.

Letina is now the Zanu PF national secretary for administration in the Women`s League and is reportedly also a close ally to the First Lady, Grace Mugabe.

â€œUndenge is pushing for Mutezo ouster so that his wife can take over,â€ said a party member.

â€œThey want to run the two Chimanimani constituencies as you know Undenge is the Chimanimani East legislator.â€