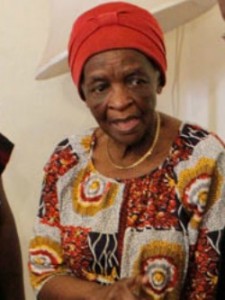 Mugabe told Zanu PF members in Harare that Victoria was found dead in the bathroom by her daughter who had driven to collect her for Fridayâ€™s Central Committee meeting.

The 101 Zanu PF Central Committee meeting observed a minute of silence for Victoria who was 89 at the time of her death.

Victoria was born in South Africa where she met her late husband when they were students at Adams College in Natal, near Durban.

Herbert later became a lawyer and Zanu PF national chairman. He was killed by a car bomb in Zambia in 1975 and many reports have implicated his comrades in his assassination while some have blamed the Rhodesian government. However, his killing in Zambia led to many of his comrades being arrested by the Kenneth Kaunda government.

At the time of her husband’s death, Victoria was living in Tanzania where she was a teacher. She was to become a minister in independent Zimbabwe, holding a number of portfolios.