The conferment of national heroine status to the late Vivian Mwashita is highly demeaning to the people of Zimbabwe but especially the late Victoria Chitepo who will also be buried at the national shrine on the same day, on Wednesday with Mwashita. 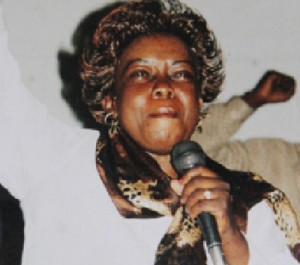 Mai Chitepo, who died last Friday at her home, was an unwavering struggle icon who fought tirelessly for the liberation of Zimbabwe, despite facing personal challenges after her husband; Herbert Chitepo was murdered by known Zanu leaders in March 1975 in Lusaka, Zambia.

She continued to diligently serve the people of Zimbabwe after independence in various ministerial positions that she held and will also be remembered in helping in the upliftment of marginalized, rural women.

Herbert Chitepo was the Zanu chairman when he died in a car bomb and was reburied at the National Heroesâ€™ Acre after independence in 1980.

However, Mwashita like other Zanu PF crooks is a well-known fraudster who received hundreds of thousands dollars from the War Victims Compensation Fund in 1997 after claiming to have suffered 94% disability from war injuries.

Mwashita is also remembered for vote rigging in the August 1995 Harare South parliamentary election against an independent candidate, Margaret Dongo.

However, after Dongoâ€™s defeat was announced, she was convinced that the election had been rigged, and challenged the result in court. The subsequent court case revealed serious defects in the electoral roll, including the registration of many non-resident voters, suggesting that at least 41% of the names on the roll were inaccurate.

Dongo went back to Harare South as an independent candidate in the re-run and on 25 November 1995 she won the re-run against Mwashita.Â  Mwashita then resorted to the use of political violence against those perceived to have voted against her and Zanu PF.

We, therefore, find the attempt by Zanu PF to bury Mwashita at the same shrine with the Chitepos as an attempt to undercut their illustrious history and their great legacy as Zanu PF and Robert Mugabe are troubled by the memorable work that was done by Herbert Chitepo during the liberation struggle.

It is a shame that since Zanu PF is responsible for the death of Herbert Chitepo; it wants to score cheap political points even in death.

It is for this reason that as the Peopleâ€™s Democratic Party (PDP), we will not be going to the National Heroesâ€™ Acre to pay our last respects to Mai Victoria Chitepo and we will honour the role she played during the struggle and post-independence in private.

As PDP, our position is that the conferment of hero status is an important status and it cannot be done by a subjective organisation like the Zanu PFâ€™s Politburo, which will most certainly discriminate against deserving individuals other deserving people such as the late Patrick Kombayi and Wilfred Mhanda.