A GROUP of war veterans said Tuesday that they had withdrawn, with immediate effect, President Robert Mugabeâ€™s mandate to lead Zanu PF, saying the 92-year-old was never â€œelected but â€¦ only selected to lead in the struggle.â€ 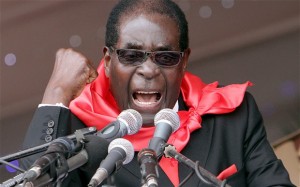 Addressing a press conference in Harare, the groupâ€™s leader Bernard Manyadza (war name Paka Chipowera) and a member of the High Command during the liberation war, said the decision means that Mugabe cannot be the ruling partyâ€™s candidate in the 2018 elections.

â€œMugabe has failed this country and he is no longer able to hold national duties. It is us war veterans who put him in power in 1975 through the Mgagao Document which removed Ndabaningi Sithole,â€ Manyadza told reporters.

â€œWe, the war veterans who agreed to the authorship of the Mgagao Document and appended our signatures to it, now withdraw the mandate we gave to Robert Mugabe to be the leader of the struggle.â€

Manyadza and his group condemned the April 7 meeting between Mugabe and war veterans, saying the veteran leader blocked genuine former fighters from attending.

He said the meeting, claimed to have bought together by 10,000 war vets, was attended by â€œpseudo-war veteransâ€ and â€œgreen bombersâ€.

â€œGenuineâ€ former fighters like Margaret Dongo were barred from the meeting â€œdeemed to be openly opposed to Robert Mugabeâ€™s continued mis-ruleâ€.

â€œMugabe legitimized attendance by some pseudo-war veterans and â€˜green bombers â€˜and these illegitimate attendees are Zanu PF sycophants and bootlickers who can be best described as charlatans and opportunists,â€ said Manyadza.

Mugabe called the meeting supposedly to address the former fightersâ€™ welfare concerns but accused them, prior to the gathering, of trying to topple him from power.

Ahead of the meeting, anti-riot police used tear gas and water cannon as they tried to gather for a meeting in Harare. Mugabe later apologised for the police reaction but fired war veteransâ€™ leader Chris Mutsvangwa from his cabinet.

Manyadza said Mugabe was not interested in addressing the former fightersâ€™ welfare concerns, adding that if he was, the meeting April 7 meeting would not have been held with â€œgreen bombersâ€.

He said Mugabe should have met the leaders of the war veteransâ€™ association or surviving members of the High Command, members of the General Staff and/or operational detachment commanders of both Zimbabwe National Liberation Army (ZANLA) and Zimbabwe People’s Revolutionary Army (ZIPRA).

Meanwhile, Manyadza paid tribute to the late Zanu PF chairman Herbert Chitepo, who insisted that, â€œthere never was and never will be a living heroâ€.

Apparently mocking Mugabe who is described in god-like terms by some in the ruling party, Manyadza said Chitepo refused to allow slogans like, â€œPamberi naChitepo or nani zvake because he â€œremained firm on the principle that all humans were fallibleâ€.

The war veterans also criticized Mugabe over the way former Vice President Joice Mujuru was removed from her position and in the ruling party and the government, the administration of the economy and the Zanu PF leaderâ€™s â€œworthless trips around the worldâ€.