YET another footgae of Mugabe's encounter with Nigerian journalists last year has emerged. 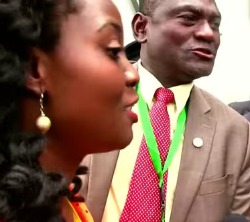 Once again, the footage shows Adeola Faehun and a range of other Nigerian journalists swarming around Mugabe asking when he was going to step down.

A visibly miffied Mugabe walks quietly towards his official vehicle with members of his close security unit clealy confused and disturbed.

An embarassed and helpless Foreign Affairs Minister, Simbarashe Mumbengegwi, is seen emerging from behind Mugabe.