A ZIMBABWE pastor's searingly honest account of both loving and feeling alienated from the flag of the country of his birth has stirred the emotions of thousands and prompted a flood of "flag selfies". 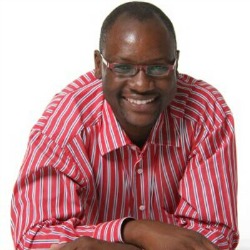 No crops in my country … Pastor Evan Mawarire

In a video that’s had more than 85 000 views in just three days, Evan Mawarire, a well-known Harare author, speaker and church leader, details the mixed emotions Zimbabwe’s black, red, yellow and green flag provokes in him.

The clip was posted early on Wednesday, two days after Zimbabwe marked its 36th anniversary of independence.

Staring into the camera as he twists the flag in his hands, Mawarire acknowledges the “official” meaning of each colour as millions of Zimbabwean schoolchildren will have learnt.

In words that appear to have resonated with many Zimbabweans torn between unshakable loyalty to their country and pain at a difficult economic and political situation that has gone on for years, Mawarire says: “This flag, this beautiful flag, they tell me that the green is for the vegetation and the crops. I don’t see any crops in my country.

“The yellow is for all the minerals… I don’t know how much is left. I don’t know who they sold it to and how much they got for it.”

His words appear at least in part to be a reference to controversy over Zimbabwe’s missing diamond wealth, with a recent acknowledgement from President Robert Mugabe that up to $15bn worth of gems had disappeared in recent years.

“They tell me that the black is for the majority people like me and yet for some reason I don’t feel like I am a part of it,” Mawarire says.

Mawarire’s words prompted an outpouring of emotion on social media, with hundreds of comments and nearly 2 000 shares.

Among them was business mogul and former banker Nigel Chanakira who tweeted: “#ThisFlag. Make a bold statement for Our nation Zimbabwe. We can do better!”

Zimbabwean mbira player Hope Masike posted photos of herself with the flag on Instagram, urging Zimbabweans to “Share, tag your tribe”.

Mawarire, who sprung to prominence with his books about sex and marriage, has not made such a strong public statement about Zimbabwe’s long-running crisis before. He does not name Mugabe or his government in the video.

After more than three decades in power, the 92-year-old president does not take kindly to criticism from churchmen.

Several who have dared voice criticism have found themselves humiliated.

Pius Ncube, an outspoken former archbishop in the Roman Catholic Church had to resign in 2007 after he was shamed in a sex scandal that many still believe to have been a set-up.

Mawarire posted to Facebook: “At some point one has to throw caution to the wind and jump. Tired of standing on the edge.”

In his video he says of the Zimbabwe flag: “The green represents the power of being able to push through soil, push past limitations and flourish and grow. That’s me, my flag.Â I will fight for it and live for it and stand for it.”

He has acknowledged that some people are “upset” with the clip.

Zimbabwe’s ruling Zanu-PF party is torn by increasingly public bitter struggles for power as hunger grows on the back of the drought.

Finance Minister Patrick Chinamasa told a politburo meeting in early April that as many as 5m Â Zimbabweans could be in need of food aid, according to a report from the state ZBC broadcaster.