The residents of Bindura and Plumtree were afforded an opportunity on 15 April 2016 to air their views on the National Peace and Reconciliation Commission (NPRC) Bill. The Parliament of Zimbabwe is conducting the public hearings in order to solicit public views on the NPRC Bill gazetted on December 18, 2015. 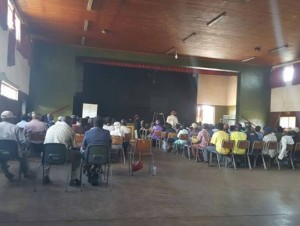 Some of the participants who attended the Bindura hearing

The hearings ending on the 20th of April were rushed and the Billâ€™s consultative process falls short of thorough public scrutiny as many citizens did not have an opportunity to read the draft legislation. Central issues that dominated both meetings were revolving around the sweeping powers conferred to the Minister, distrust among citizens about the potential effectiveness of the NPRC, need for compensation and standard remedies.

The public hearing held in Bindura was led by Honourable Senator Mumvuri while in Plumtree, Hon Jessie Majome led the process. Both meetings had fair attendance of approximately 180 and 120 people in Bindura and Plumtree, respectively. However, participants complained about the non-availability of the draft legislation copies. In Bindura the horrors of the 2008 elections emotionally affected participants who narrated torture experiences from Tendai Hall where the hearing was being conducted. Participants clamoured for restorative justice mechanisms to be clear in the Bill.

Below are the issues that were raised by participants in Bindura during the public hearing.

In Plumtree the hearing started off well but the only challenge being the shortage of copies of the bill. The Parliamentary team highlighted the role the NPRC in healing, reconciliation and gave a brief summary of the bill. Well-wishers in Plumtree provided copies of the Bill to the participants. In addition, Gukurahundi reminiscences engulfed the Plumtree meeting atmosphere.

Heal Zimbabwe will continue to provide these updates to the members of the public as well as monitoring the reaming consultative meeting processes. Below are the remaining public meetings