DISMISSED Zanu PF youths have warned senior party members from the G40 faction to resign â€œhonourablyâ€ lest they be forced to step down through â€œnaming and shamingâ€. 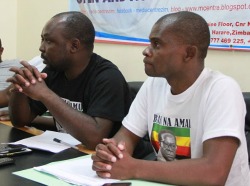 Ready to name and shame … Godfrey Tsenengamu and Godwin Gomwe

Addressing a press conference in Harare Thursday, the ousted youth leaders from the Mnangagwa faction said Zanu PFâ€™s problems were a result of â€œartificial divisionsâ€ caused by individuals appointed by President Robert Mugabe.

They named Zanu PF political commissar, Saviour Kasukuwere, Politburo members and ministers Jonathan Moyo and Patrick Zhuwao, calling on them to step down.

â€œTo these factionalists and trouble causers we say resign honourably and give the party a chance to survive or we shall name, shame and force you to resign soon. Stop playing the victim when you are the offenders,â€ said Godfrey Tsenengamu, who read the statement.

â€œIt has come to our attention that some in the leadership have been abusing these strategic party and government deployments to amass power, resources and influence, arm-twisting and manipulating some innocent party cadres and involving them in their dirty schemes without their full knowledge and consent,â€ claimed Tsenengamu.

The group further said whoever dared challenge the G40 individuals tends to suffer unconstitutional suspension or expulsion and, in some cases, even withdrawal of privileges and benefits rightfully acquired.

The youths, who call themselves the legitimate and elected Provincial Youth Chairpersons, called on president Mugabe to monitor cabinet ministers.

â€œThese power mongers and opportunists are the real trouble makers and architects of the problems facing our party and have just been abusing the names and influence of the President and Grace Mugabe.

â€œWe say to them stand on your own and stop misinforming the leader and abusing his name,â€ Tsenengamu told journalists.

Zanu PF is facing probably one of the worst ructions in the history of the party with accusations and counter accusations being the order of the day.

The Generation 40 (G40) is said to be fighting Grace Mugabeâ€™s corner in the succession battle against the Mnangangwa faction known as Team Lacoste.