GABORONE, BOTSWANA â€” Recent developments increasingly point to a Botswana government getting weary of the economic meltdown in Zimbabwe. 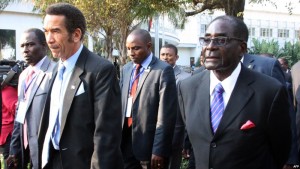 From the recently introduced shoot-to-kill stray Zimbabwean cattle to suggesting Zimbabwe prison inmates should serve terms in their own country, Botswana’s agitation is coming to the fore.

Botswana has always maintained cordial relations with Zimbabwe despite bearing the burden of an influx of illegal immigrants from its neighbor.

An estimated 1,000 Zimbabweans cross into Botswana daily for shopping but critically to look for jobs which have proved elusive in their homeland.

With the economic slowdown in Zimbabwe showing no signs of abating, Botswana is fast showing signs of agitation.

Botswana recently announced that it would shoot to kill stray Zimbabwean cattle as it fights the resurfacing foot and mouth disease which has persisted over the years.

The spread of the disease is blamed on illegal immigrants who cut the fence along the two countries’ borders, thereby allowing animals to roam free.

Other immigrants illegally cross with fruits and vegetables for re-sale, in the process carrying across the fruit fly, which causes crop diseases.

Botswana has suggested that the more than 500 Zimbabweans incarcerated at various prisons in its country should be sent back to their homeland to serve the remainder of their sentences.

Political commentator, Thato Kereng, says Botswana is being affected by the meltdown in Zimbabwe.

â€œBotswana is affected because of the situation in Zimbabwe. Now they are forced to tighten with the introduction of the various interventions.â€

He argues that the moves taken by Botswana are in the interest of its citizens. â€œI think itâ€™s understandable. If you have a neighbor like Zimbabwe and the situation is affecting you, you have to take steps to make sure you protect your own interests and your own people.â€

Zimbabwean Clement Zibanani feels as long as the situation in his country persists, the challenges will remain, arguing the solution lies within Zimbabwe.

His fellow countryman, Farai Sibanda, says it is unfortunate that it is the ordinary people who feel the pinch, but believes it’s a clear message to the Harare authorities to clean up their mess, which is now affecting neighboring countries.

At times Botswana has been the lone critical voice, particularly at Southern African Development Community meetings, with President Ian Khama praised for his candid views.