Listening the Chief Justice Mogoeng Mogoeng delivery of the constitutional court judgement on the Nkadla issue yesterday gave me mixed emotions. I am happy and impressed that itâ€™s happening in Africa, but I am sad how far behind we are in Zimbabwe when it comes to freedom and our constitutional rights. 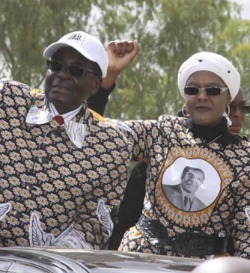 The role of any President is to use all in his powers, his conscience and judgement and the resources availed to him by the tax payer to protect the interest of the people of his country and if necessary go to war to defend those interests.

The role of any parliament is protect the interests of the people who voted them into position and ensure that any President is kept in check with regard to his constitutional obligations. It is not to protect his interests at the expense of national interests.

If we consider just these two points, we can see how far off the mark we are as a democracy.
Clearly none of the above apply to us here in Zimbabwe. We have a de facto state capture by a sitting President, his family and a ZANU (PF) aligned predatory cabal who have shown us that their personal and political interests come first before those of the citizens of Zimbabwe, we the people.

It is a huge responsibility to be called a President and it is clear to me that that President Mugabe has continually behaved and acted contrary to his constitutional responsibilities again and again with the full support of our so called democratic institutions including a parliament and a partisan judiciary, which is a tragedy. This of course includes a police force, the CIO and the army who have been part and parcel of the unconstitutional acts of the State.

The reality is therefore that we have, in Zimbabwe, State machinery that does not take its constitutional responsibilities seriously. A State which has been captured by President Mugabe and has therefore ceased to represent or be relevant to the interests of its people.

For our so called President to even say that the people of Zimbabwe want him to stay, despite numerous calls for him to step down is delusional at best.

We are in serious trouble in Zimbabwe and we all need to take things very seriously. Except we remove ZANU (PF) and its appendages from power and create a new democracy underpinned by the supremacy of our constitution in the full sense of the word, we will remain a pseudo democracy. We will continue to pretend that we are a free country and yet remain poor subjects of Mugabe and his congress of thieves.