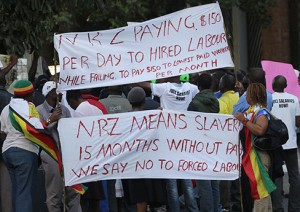 Amid reports some $3 million released by government for wages is missing, the workers handed four petitions to Parliament, NRZ Acting General Manager (GM), as well as the ministries of finance and transport.

At Parliament, the petition was handed over to the chairperson of the transport committee Dexter Nduna and NRZ Acting GM Louis Mukwada.

Among their grievances, protesters demanded explanation over the whereabouts of the $3m which NRZ management is alleged to have received from government to pay the workers.

The workers also accused management of ignoring their grievances, opting to hire locomotives from a company named BBR, an arrangement they claim is very costly to the beleaguered parastatal.

â€œWe want to know where management put the $3m given to us by the government,â€ said one of the workers.

â€œThe management is not being honest with us and we suspect the General Manager, who sits in the BBR board, has abused the money.

â€œNRZ has a 15 percent shareholding in BBR where it is hiring locomotives and this is expensive for a company that is struggling to stay afloat.â€

The workers, who have been on strike for 52 days, claim that management is forcing them to return to work without any payment upfront.

Management, they add, has resorted to re-hiring those who had retired and some in-experienced workers who are paid on a daily basis.

â€œWe understand that most of the recent accidents that have happened along the railway lines are due to managementâ€™s decision to recruit these incompetent workers,â€ added another worker.

About 1,300 workers around the country are owed various amounts by NRZ and the matter is still in courts.