Africa is arguably the most blessed place on this entire globe, and naturally this should have translated into the people of this continent being the most prosperous - however, a rogue leadership has ensured that the opposite is true. 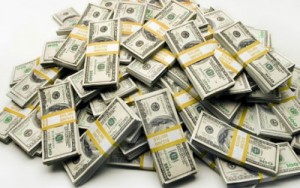 Africa – endowed with most of the world’s precious minerals, a great climate, soil that is perfect for agriculture, and a very hard-working people – deserves better leaders than what we have today, so as to ensure that these vast treasures truly benefit the people of the continent.

Unfortunately, the people of Africa have been stabbed in the back by their own rogue leaders, and have been rendered destitute in their own land of ‘milk and honey’.

No one is expecting a perfect leader, who would create a perfect paradise for all – as only Jesus Christ can do that – but the people of Africa expect them to do their best.

Africans expect their leaders to be genuinely concerned for them and to put the people first.

However, instead of doing their best to uplift the lives of African people, these leaders have been doing their utmost best to enrich themselves at the expense of the people.

African leaders have become some of the world’s wealthiest people – although they usually do not make it on the Forbes Magazine’s world’s richest people list, due to the fact that most of their wealth is ill-gotten and not openly declared.

A quick look at the lavish lifestyles of leadership cliques in these African countries leaves one dumbfounded.

In Zimbabwe, those in leadership live extravagant lifestyles, from wealth acquired through less honourable means.

Holidaying in Malaysia, Singapore, Dubai, Monaco, and so forth, flying in their private jets, giving birth in the Far East (because they do not trust their own country’s doctors!), and obtaining their education overseas.

On the contrary, the people of Africa are some of the poorest in the world – faced with insurmountable challenges, such as hunger, homelessness, unemployment, despair and hopelessness.

African leaders have more than surpassed our erstwhile colonial masters, in their greed, repression, and dishonesty – the pupil has certainly become better than the teacher.

More innocent people have lost their lives at the hands of their leaders on the African continent than anywhere else in the world.

Most of the world’s most repressive regimes are found on the African continent.

In Zimbabwe, immediately after attaining independence from Great Britain in 1980, the ZANU PF government went on a massacring spree that resulted in over 20,000 deaths – just because the leadership wanted to establish a one-party state, and as such sought to exterminate the opposition ZAPU.

This repression has continued up to today.

Is it not always embarrassing that each time there is a leader who is seeking to amend his country’s Constitution in order to prolong his stay in power, nine out of ten times, it would be an African leader – Burundi’s Pierre Nkurunzinza, Rwanda’s Paul Kagame and so many others being typical examples?

A significant number of laws enacted in African countries clearly have nothing to do with improving the lives of the ordinary people, but are there solely to prop up leaders.

A continent where a nonagenarian leader can hold on to power, by any means, for 36 years – and still craving for more!

Most wars that have been fought on the continent, similarly, have nothing to do with the welfare of the African people, but are mostly over the continent’s Â rich mineral resources, which the leaders want for themselves.

Never in the history of mankind have such greed, cruelty and repression been witnessed.

These leaders deserve to be facing justice at the International Criminal Court (ICC) than leading nations.

In Zimbabwe, since the discovery of diamonds at Chiadzwa in the Manicaland province, how many people residing in that area can honestly say that they have benefited from them?

Based on reports, the lives of the Chiadzwa people have actually become worse off, and most of them regard the diamond discovery as a curse, as this has resulted in them being evicted from their homes, and dumped in areas that are unproductive.

None of the promises made to them concerning an improvement in their wellbeing was ever fulfilled.

In fact, they have become ever more destitute.

The same modus operandi of the colonial regime.

The only people who benefited from those diamonds were those in power – with a whooping US$15 billion not being accounted for (I still can not get my mind around this)!

How could the people of Zimbabwe have benefited from that US$15 billion?

In order to feed the more than 4 million people who are facing starvation, only US$2 billion would have been enough.

Another couple of billions would have been enough to rejuvenated the ailing industrial sector in the country, thereby creating the much needed jobs, as well as enabling the country to earn vital foreign currency through exports – which would, in turn, rectify the cash crisis we are facing.

With employment, parents would have been able to feed their families, and send their children to school.

From that US$15 billion, Zimbabwe could have paid off its external debt, thereby, opening the way for further assistance from all the major international financiers.

This would have led to an overall improvement of the economy for all Zimbabweans.

However, the Zimbabwe government decided otherwise.

The US$15 billion ended up benefiting a few individuals, whilst the nation continues to wallow in poverty.

Do these leaders not feel any shame – stealing from the poor and suffering, just to add to their already fat bank balances?

Is it then not ironical that today on Africa Day, Zimbabwe’s ruling party ZANU PF, sees it fit to celebrate their leader who has presided over such a mess?

The Zimbabwean leader is truly an epitome of African leadership – no wonder ZANU PF is celebrating him!

This should clearly show what type of leadership we have on the continent.

With all the abundant resources we have in Africa, tens of millions of children do not attend school, either because the government has not built enough schools, or their parents are so poor that they can not afford to pay the fees.

Most of these schools do not even have any decent and adequate learning material.

Most people on the African continent do not have access to any safe, clean, and potable water, due to their governments’ incompetence.

Despite the droughts, Africa does have significant rainfall, and one would expect governments to put in place measures that would ensure that every drop of rainfall is harvested and stored for future usage.

When it rains, it is always so painful to watch all that water just flowing away, instead of being captured.

In times of drought, there should always be enough water to irrigate crops and for household usage.

Africa should never be a ‘drought’ continent.

African leaders should know that they are quickly running out of time.

The era of repressing their fellow Africans has come to an end, as Africa is rising.

The time for the real African renaissance has come, as this is the time for her to reclaim her place on top of the world.

However, this can never be achieved as long as we continue to tolerate most of the leadership we have today.

We have a few shining examples to learn from – such as Nelson Mandela, and others, especially the presidents of Botswana, Namibia, Tanzania, and a few others.

Africans can do it, as long as we are willing to be firm and resolute in standing up for our rights, no matter what it takes.

God did not abundantly bless Africa so that a few in power can benefit, but so that all of us can benefit – and it is time for us to boldly demand a fair share of the African cake.

Â° Tendai Ruben Mbofana is a social justice activist and commentator, writer, and journalist. He writes in his personal capacity, and welcomes all feedback. Please feel free to call/WhatsApp: +263782283975, or email: [email protected]com, or follow on Twitter: @Tendai_Mbofana