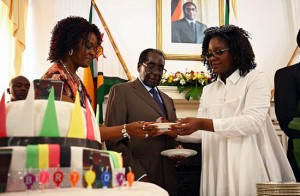 From there, he flew to South Africa for centenary celebrations at Fort Hare University where he graduated with a Bachelor of Arts degree in 1951.

Despite the regular presidential hires which his office claims Mugabe pays for, Air Zimbabwe teeters near collapse, with government recently revealing it had taken over the national airlinerâ€™s $200m debt.

â€œThe State media which regularly travels with His Excellency was left behind and likely had to make separate arrangements to return to Harare from South Africa.

â€œThe president is likely going to pick up his wife and grandson; but itâ€™s possible some (health) checks are also due â€“ who knows.â€

The veteran leaderâ€™s wife, Grace, has been in the Southeast Asian island city state since, supporting their daughter.

Addressing relatives in Masvingo recently, Mugabe said he expected his wife and grandson back this week, revealing that doctors had advised that the tot could only fly to Harare after a month.

The First Familyâ€™s decision for Bona to deliver her son in Singapore was widely criticised locally.

But Zanu PF legislators defended the Mugabes when the matter was brought up in Parliament Thursday by the opposition.

MDC-T Zengeza East MP, Alexio Musundire, angered the ruling party after saying Mugabe should lead by example and should have sent his daughter to give birth at a local hospital.

Zanu PF MPs led by Chegutu East MP, Webster Shamu, rose to their feet to and demanded that Musundire be stopped from debating Mugabeâ€™s daughter.

â€œFirst, we cannot discuss someone who is not present in Parliament. Second, a person is allowed to seek medical treatment at an institution of their choice,â€ said Shamu.

Added Zanu PF legislator (Proportional Representation) Sabina Thembani: â€œWhen someone is married, like the Presidentâ€™s daughter is, she can decide with her husband where they prefer to get medical treatment.â€Â