ZIMBABWE has failed to pay a P1.4million (about) US$90,000 debt owed to Botswana since 2011, Parliamentarians in the neighbouring country heard this week. 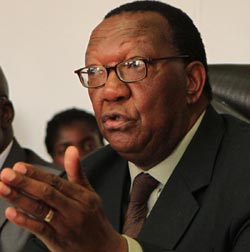 Struggling with a crippled economy and a mountain of foreign debt said to be more than US$10billion, the Botswana obligation looks like small beans but some parliamentarians in the neighbouring country begged to differ.

Debating the debt before the Parliamentary Accounts Committee (PAC) this week, some MPs insisted that Gaborone should stop â€œacting like a rich nationâ€ and demand repayment from Harare.

â€œIn 2015 we wrote a letter to the Minister of Agriculture in Zimbabwe and he responded by saying they were willing to pay, but the problem was that they did not have money,â€ he said.

â€œWe then communicated with the Zimbabwean ambassador who also responded by saying the country was in a dire situation and they would not be able to pay the debt even if they were willing.â€

Debating the issue in the Parliamentary Accounts Committee (PAC), some MPs urged the government to consider cancelling the debt.

â€œThe Zimbabwean economyâ€™s recovery would mean that it has a positive impact on ours because both the two countries feed on each other more so that we are just beating a dead horse,â€ said PAC member and Bonnington South MP, Ndaba Gaolathe.

Others however, insisted that Harare must be made to pay up.

â€œThe ministry should find ways to collect the debt whether the country has money or not.Â  They entered into an agreement and they knew they had to pay,â€ said PAC member Ignatius Moswaane.

â€œWe should stop acting like a rich nation and stop making unnecessary donations. We should try to get what is owed to us because if not others who owe will also want their debts to be cancelled.

â€œJust imagine, how many millions would then be lost,â€ he said.

The debt arose from the 2011 export, to Zimbabwe, of 26,503 cattle that had survived a Foot and Mouth Disease (FMD) outbreak which led to a mass slaughter of infected beasts among other control measures and forced an extended suspension of Botswana beef exports to the European Union (EU).

The cattle were sold in a government-to-government deal to the Zimbabwean State-owned Cold Storage Commission (CSC) where they were slaughtered and the beef sold at subsidised prices.

In terms of the agreement, the Zimbabwean government would pay the entire debt owed to Botswana within 45 days of the conclusion of the cattle deliveries in July 2011.

Botswana has repeatedly blamed infected cattle which cross into the country through the riverine borders with Zimbabwe, where livestock disease control and agricultural extension services collapsed in the 2000-2009 decade of economic meltdown which was triggered by a continuing political crisis.

Last month, the government of Botswana announced that all Zimbabwean livestock which strayed into the country would be shot on sight to prevent the spread of FMD.

The Zimbabwean government is still struggling to contain a FMD outbreak which has started in the Matabeleland North and South provinces which shares borders with Botswana and South Africa in August last year.

The disease has since spread to at least three more of the countryâ€™s ten provinces.