ARMY Commander, General Constantine Chiwenga should shape his political thinking in order to suit the incoming government after Zanu PF, the MDC-T national secretary for security Giles Mutsekwa has said. 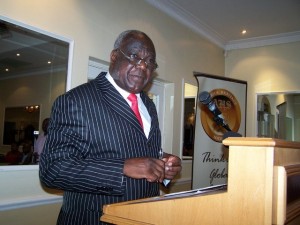 In an interview with The Zimbabwean today in Mutare, Mutsekwa who is also the MDC-Tâ€™s shadow minister of Home Affairs blasted Chiwenga for coming out in support of Zanu (PF).

He added that Chiwenga should be careful with Zanu (PF) politics as he should take lessons from his predecessors who were later dumped by the Robert Mugabe led party.
Said Mutsekwa: â€œChiwenga should not spoil his name and he should show professionalism. He needs to understand that he is the highest ranked person in the military. He has been put on spotlight and his position is for every citizen to envy.â€
He added: â€œHe should remember that his predecessors like Josiah Tungamirai, Vitalis Zvinavashe and Johanne Maseko were army commanders who were partisan but look at what happened to them they were dumped by Zanu PF. He should be very careful, he is being used by Zanu PF and should look at his life after Zanu PF.â€
Mutsekwa said: â€œAs MDC-T we are watching him. He should start showing professionalism towards his duties. He should be a good example of a commander and also be a good term of reference by all the incoming governments after Zanu (PF).â€ Mutsekwa said if Chiwenga remains partisan, he should resign and leave his position to professional soldiers keen to respect the Constitution and will of the people.
He also took a swipe at the national police spokesperson, Charity Charamba, whom he said was also sinking in Zanu PF politics. â€œShe is excited for nothing. Her job is to protect citizens and not to threaten them. She is a person whom all the people look up to. There are several cases of harsh treatment of our innocent people,â€ said Mutsekwa.
He added that the police should understand the supreme law of the country and Charamba should not challenge various court outcomes. â€œWhat she is doing is against the national Constitution. She is simply defying authority,â€ said Mutsekwa.
He said the army and police officers should stop making public political statements in order to be promoted.
Post published in: Featured