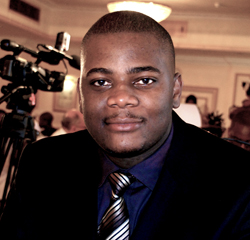 Pikirayi Deketeke, CEO of Zimpapers which publishes The Chronicle, flew to Bulawayo in the evening to personally deliver the blow, NewZimbabwe.com understands.

Deketeke travelled after Mathuthu missed his flight to Harare in the morning following a summons for an audience with his boss at Herald House, the Zimpapers head office.

Innocent Madonko, current deputy editor, will take over as acting editor effective Monday, May 23, giving Muthuthu just three days to clear out of his office.

Sources told NewZimbabwe.com that Mathuthu has been seconded to Namibia as editor of the obscure Southern Times â€“ a government-sponsored joint venture with the Windhoek administration.

It was unclear last night whether the former NewZimbabwe.com editor had accepted the forced switch; or what would happen should he refuse.

Asked about the developments, Mathuthu referred us to Deketeke who could not be reached for comment.

Meanwhile, the changes come a time Zimpapers are in the eye of a storm as Zanu PF factions jostle for turf in a bitter war to anoint President Robert Mugabe’s heir.

Mathuthu, who joined The Chronicle in October 2013, is seen by loyalists of Vice President Emmerson Mnangagwa currently in charge at the Information Ministry as an inconvenient impediment to their plan to control the message.

Zimpapers’ two other major papers, The Herald and The Sunday Mail, have, in recent months, been flag bearers for the Mnangagwa faction which is known as Lacoste.

Mathuthu is thought to have taken a shine to the G40 faction, which seen as determined to thwart Mnangagwa’s ambitions for the top job.

Sources at the Information Ministry’s Munhumutapa Building said Information Minister Chris Mushohwe, his deputy Thokozile Mathuthu and permanent secretary George Charamba had summoned the Zimpapers CEO Pikirayi Deketeke early this week and ordered him to remove Mathuthu from The Chronicle.

“Mushohwe was unhappy with a story saying Mugabe will decide the fate of Prosecutor General Johannes Tomana which The Chronicle put on the front page. You should understand Tomana is their guy.

â€œHe (Mushohwe) was also unhappy over some other stories, including one published during the Trade Fair which he said reflected badly on the country in the presence of foreign visitors,” an senior government official.

Charamba, it is understood, told Deketeke that he had “long told Zimpapers” to fire or move Mathuthu, suggesting his orders were being defied.

Surprisingly, Deputy Minister Mathuthu also twisted the knife on the editor, a distant relative, claiming Mathuthu’s assistants were doing most of the work as he was hardly in the office.