Kuwirirana peace club in Gutu Ward 41 is one of many such community structures that works with Heal Zimbabwe in Gutu. The peace clubs recently successfully utilized a traditional form of collaborative neutral platforms known as nhimbes/ilima to resolve community conflict and promote social cohesion to ensure peaceful coexistence in their community. 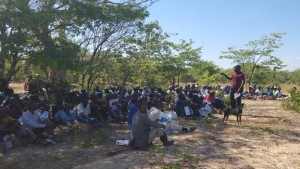 Following a capacity building process through trainings that was carried out early 2016 , the peace clubs managed to carry outÂ  a conflict mapping exercise in their area, where they were identifying conflictsÂ  in their area. Among the conflicts identified include the fact that transport operators in the area were now shunning the route, which connects MutemaÂ  and Mukundi business centers, because the road was in a bad state. The community in Ward 31 which boarders Ward 41 had created a culture of repairing the road as it passes through their ward but in ward 41 the same road was neglected till transport operators cancelled the route. Makuku Bus Company, the only one that is still servicing the route was now threatening to withdraw its services. This created transport problems for the whole community and those in ward 31 were blaming those in ward 41 that because they neglected the road, this has led to transport operators to shun the route.

Realising the impending danger and its effects to the two communities, Kuwirirana peace club led by Headman Mutema decided to address it by coming together and engage in the important collective responsibility through a nhimbe. Through the Headman, the peace club invited 26 Village heads from the two wards. The Village heads mobilized their community members for the nhimbe since the road served everyone. While the major outcome of the process was road repairing, the Peace club also utilized the platform to raise awareness on the importance of peace in the community. In his opening remarks, Headman Mutema highlighted the importance of the prevalence of peace. â€œToday we are gathered here as one community to work on something very important to all of us, this road serve all of us including our neighbours in ward 31Â  and this shows that if we are united, we can champion peace and development in our areaâ€, he said.

The nhimbe managed to prove the importance of collective responsibility and the need for social cohesion in successful community development work. Headman Maworera of Ward 31 acknowledged that the nhimbe had managed to avert potential conflicts and bad social relations that were beginning to gather. â€œToday is a historic day for us in our area, indeed peace is important for development, I would like to thank the Peace club in Ward 41 which organized this nhimbe, today we have been united by the need for developmentâ€, he said. Headman Maworera also indicated that he would want to set up a peace club in his area as it has proved that it can help resolve conflict and build peace.

Collaborative neutral platforms (nhimbes) are organized by peace club with support from Heal Zimbabwe as a way of promoting community led activities that seek to build peace in local communities. Through linking development and peace, the activities encourage communities to come together for the common good and work on potential sources of conflict in a bid to address and manage conflict before it escalates into violence.Â  This nhimbe in Gutu is one among many initiatives by Heal Zimbabwe to build peace in local communities.