NATIONAL police spokesperson, Friday told court that her boss, Commissioner General Augustine Chihuri sent her to demand the name of a senior cop involved in cyanide poaching which killed over 100 elephants last year. 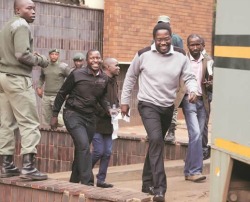 Being led by the state as the trial proceeded, Charity Charamba said only this could prove the truthfulness of the story which saw Sunday Mail editor and scribes dragged to court.

â€œI have a message for this court from the Commissioner General, he said we require the name of the Assistant Commissioner involved in this case. We have extensively carried out investigations but failed to establish the truthfulness of the allegations in the article. Until otherwise proven, this story remains a false story,â€ she said.

They are being charged with publishing falsehoods.

The trio were arrested after publishing a story which implicated a senior Assistant Commissioner in cyanide poaching, claiming investigations were under way.

Charamba told the court she never confirmed that any investigations against a senior police officer were being carried out when Farawo contacted her for a comment.

She said the story had serious implications on her career as well as the countryâ€™s economy.

Charamba blamed Sasa for failing to seek clarity over a matter which was so serious and something which happens occasionally.

â€œThere are no rules barring editors to verify with the police when there is such a serious case. If he had such information we were equally worried about it and if he could furnish us with the name it would be helpful, we require the name so that we can proceed,â€ she said.

Charamba told court that following the publication of the story, the public lost confidence in the police.

â€œThe public had a picture that we were protecting a wrong Assistant Commissioner. When such a thing happens, people can even revolt against the police,â€ she said.

However during cross examination, the journalistsâ€™ defence, Advocate Fadzayi Mahere, said the whole story was not wrong.

She insisted that that the story did not imply that the police were carrying investigations.

She queried Charamba if it was only the police mandated to investigate or if other officials in parks and wild life authority had such a privilege.

Charamba said some authorities from national parks would carry initial investigations before engaging the police.

In that regard, Advocate said so it was true that some investigations involving a senior cop were being carried out.

â€œPreliminary gathering of information is a form of investigation even if the police are not involved,â€ she said.

Charamba said it was logical.

She also asked Charamba if she was testifying to protect the image of the police force.

Charamba also told court that she did not know for a fact if any senior officer was involved as investigations were still under way.