1st May â€“ May Day â€“ is celebrated around the world to honour workers. Indeed, Zimbabwe calls it Workersâ€™ Day. But the MDC says it should now be rebranded Vendorsâ€™ Day instead. 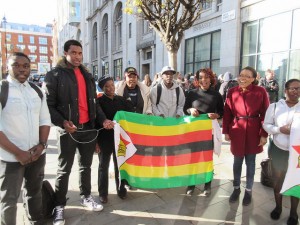 MDC spokesman Obert Gutu says there is nothing to celebrate given the depressing state of the economy. Zanu PF, he pointed out, had failed to create the 2.2 million jobs it promised at the 2013 elections. Instead it had created 2 million â€˜vendors and loafersâ€™.

An equally gloomy view came from Peopleâ€™s Democratic Partyâ€™s spokesman Jacob Mafume: â€˜The nation is facing insurmountable challenges underlined by a decaying economy, high unemployment and total collapse of service delivery, a ravaging drought and general hopelessness among the generality of the people,â€™ he said. â€˜About 98% of youths are in the informal sector, 60% of the industries which we had operating in 2010 have shut down, 83% of our people live on less than $1 a day and our women still die while giving birth because our hospitals lack basic facilities and medicines.â€™ (see: https://www.newsday.co.zw/2016/04/29/workers-day-reduced-vendors-day/).

Even people in work are suffering from the economic meltdown as banks struggle to find cash. As Radio Voice of the People puts it â€˜itâ€™s dÃ©jÃ  vu againâ€™ with many workers reliving the nightmare of 2008 when banks imposed daily cash withdrawal limits (see: http://www.radiovop.com/index.php/national-news/13676-only-hard-decisions-can-save-zimbabwe-from-cash-crisis.html).

Back then the financial collapse led of course to the South African-brokered coalition government which pulled the country back from the abyss but saved Mugabe. The Vigil fears that this time Britain and the international community will come to the rescue of Mugabe with mad new lending to a totally corrupt and self-serving regime which will steal every cent of it with no prospect at all of repayment or the money being used to benefit the people at large.

The announcement this week of a conference to be held in London in July to discuss a proposed deal between Mugabe and the International Monetary Fund and the World Bank confirms the Vigilâ€™s suspicions that once again the UK has misread the situation in Zimbabwe. You could say it is dÃ©jÃ  vu yet again.

What does Ms Laing think that Mugabeâ€™s gang will do with the money apart from paying the Israeli Nikuv company to rig the next elections as usual? Wouldnâ€™t it be better to wait until Zanu PF actually implements the new constitution and better still after free and fair elections before they give Zimbabwe more money. As it looks at the moment there are strong indications that Zanu PF will again resort to violence in the run up to the elections in 2018 (see: http://www.zimbabwesituation.com/news/zimsit-m-zanu-pf-threatens-bloody-2018-polls-newsday-zimbabwe/).

The Vigil notes that the London conference is to be attended by monstrous minister Mpofu, who is suspiciously wealthy. He will no doubt be addressing the meeting about ethics. We see that one of the people involved is Knox Chitiyo of the London think tank Chatham House. The Vigil doesnâ€™t think of him as an objective academic but we accept he has â€˜insideâ€™ knowledge of Zanu PF.

The Vigil will be waiting for them outside the venue. With tickets priced from Â£425 to Â£625 (if you want to kiss Mpofu) we will have to be outsiders.