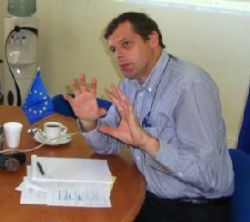 The EU envoy to Zimbabwe said this to journalists at an event held to mark World Press Freedom day which was hosted by MISA-Zimbabwe at the Quill club, in Harare, Wednesday evening.

Van Damme was invited to share Brusselsâ€™ view on media freedom and freedom of expression.

â€œI have to be very frank; I do not think an international investor can make decisions based on newspaper reports. The decisions are made based on facts. The legal framework, the credibility of the legal framework, rule of law in terms of the judiciary, these are things which influence investment,â€ he said.

The ruling Zanu PF government routinely accuses the private media of what it says are â€œnegative reportsâ€ which Harare claims are the main cause for lowÂ uptake of investment opportunities by the west.

As a result, the government has also threatened to shut down private media organisations.

But ambassador Van Damme said instead of accusing the media, Harare should see to it that its economic policies were favourable while protecting media freedom and the rule of law as dictated by the constitution.

Among the laws that have been blamed for Zimbabweâ€™s negative image is the controversial indigenisation policy. The legislation which government has been failing to sincerely interpret for almost a decade, apparently gives majority share- holding to local blacks in some foreign business ventures.

He said the Zimbabwean media were missing out on developmental debates.

â€œThere is not enough debate on the development and substantive issues; on what are the economic policies, the social policies and the environmental issues which this country should develop,â€ he said.