Exiled Zimbabweans in the UK welcomed remarks this week by US Ambassador to Zimbabwe, Peter Harry Thomas Jr, who called for full implementation of the constitution, an up-to-date votersâ€™ roll, the elimination of corruption and a â€˜reliableâ€™ court system. 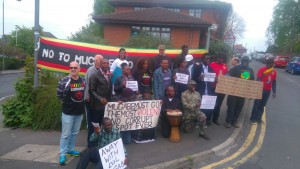 Speaking to journalists in Harare, Mr Thomas said this was critical if Zimbabwe is to have free and fair elections in 2018. He added: â€˜We donâ€™t want to see violence; we donâ€™t want to see intimidation. We want to see people who are given the opportunity to campaign without fear of harassment and the start is full implementation of the 2013 constitutionâ€™ (see: http://www.theindependent.co.zw/2016/05/13/finalise-political-reforms-us-envoy/).

So far so good. But the Vigil would like clarification of Mr Thomasâ€™s assertion that the US is â€˜in support of Zimbabweâ€™s re-engagement with the international financial institutionsâ€™. What exactly does this mean?

Zimbabwe desperately needs money, sure. The reason is clear: Mugabe and his cronies have stolen everything. There is pervasive corruption at all levels as well as institutionalised incompetence.

An example: Health Minister Dr David Parirenyatwa says his ministry needs $65 million urgently to buy drugs. He said the Treasury approved a budget of $450,000 for Midlands province but it was given only $3,000 â€“ and that was also to cover patientsâ€™ food and utility bills . . . Vice-President Mphoko of course blamed Western sanctions (see: http://www.zimbabwesituation.com/news/zimsit-m-health-sector-needs-65m-for-drugs-the-herald/).

The Vigilâ€™s fear is that â€˜re-engagementâ€™ with the International Monetary Fund and World Bank means approval of some creative bookkeeping to deal with Zimbabweâ€™s debt to these institutions allowing the imploding regime to access more loans to enable it to steal yet another election.

Having been turned down by his â€˜all-weather friendsâ€™ Mugabe has been left with no option but to try to con money from the enemy and has come up with a plethora of promises from dealing with corruption to a land audit and compensation for white farmers, from halving the state wage bill to reforming bankrupt parastatals. All this is fantasy as there is no real will or capacity to achieve these goals.

The IMF has recently toughened its hitherto craven language about the regime. We want it to get even tougher and tell Mugabe that new money will only come if the West is at long last allowed in to observe the elections and judge whether they have been free and fair.

As we have pointed out before, the stakes are high. Zanu PF has long been a malignant influence in the region as is shown clearly by recent developments in South Africa. Witness the paranoia of ANC Secretary-General Gwede Mantashe, facing growing opposition to the party, parroting the line that the West is pushing for â€˜regime changeâ€™ in South Africa. Where did we hear that before? (See: http://www.iol.co.za/news/politics/regime-change-claims-reflect-ancs-paranoia-2020528).

Â·Â Â Â Â Â Â  More than 30 Vigil and ROHR supporters staged another demonstration on Friday outside the clinic in Nottingham run by Dr Sylvester Nyatsuro and his wife Veronica who have seized a farm belonging to a white Zimbabwean. We are campaigning for Nyatsuroâ€™s British passport to be withdrawn. A local journalist there to report the demonstration asked for an interview with Nyatsuro but was turned down. Some of the protesters approached Veronica as she entered the clinic but she refused to say anything â€“ even when asked for advice on who to contact to get a stolen farm. A Kenyan lady arrived at the clinic in a Mercedes said she didnâ€™t understand why we were protesting against a black person taking over a farm and that we were embarrassing her doctor. We replied that his greed was embarrassing us. A more positive response came from a local nurse who took a bundle of our leaflets to hand out to patients. One the organisers of the demonstration Sally Mutseyami was interviewed by the journalist for a radio broadcast the day before about the protest. Two videos of the protest have been posted on YouTube: https://www.youtube.com/watch?v=8YxsI9RXADs Campaigners against Zimbabwe born doctor and wife and https://www.youtube.com/watch?v=9vwobfmp8pc Campaigners against Zimbabwe doctor over land grab.