PRESIDENT Robert Mugabe has said opposition parties in Zimbabwe should fight the Americans - not him and his ruling Zanu PF party. 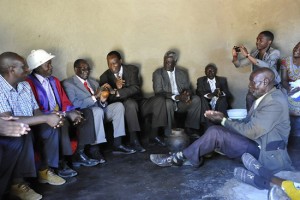 The 92-year-old leader opined about the role of rivals while addressing supporters at a rally in Masvingo last Friday.

A claimed teetotaler, Mugabe spoke after sharing a calabash of the traditional 7-day brew with villagers while paying his respects to the late Chief Gutu â€“ an uncle of his â€“ who died in 2013.

â€œYou never hear any of the opposition parties saying we donâ€™t want our country to return to white rule,â€ said the veteran leader who believes Western countries are working to recolonise Zimbabwe.

â€œNone of them; whether itâ€™s MDC-T, MDC – Z or Simba Makoniâ€™s Sun Rise â€“ what is it called by the way? Or even this other party calling itself People First.

He continued: â€œThey never criticise the Americans and the British.

â€œAll they do is fight Zanu PF. What have we done wrong – bringing freedom to the country?â€

Mugabe, in power since independence in 1980, refuses culpability for the countryâ€™s problems.

Zimbabwe has struggled with a serious economic crisis for some 15 years which critics blame on the veteran leaderâ€™s misrule.

â€œToday we are under sanctions and we ask the Americans why they are fighting us,â€ he said Friday.

â€œWe do not want anything from the West. If they donâ€™t want to have any relations with us, fair enough but why punish us with sanctions?

â€œWhy should the West be angered by the fact that we took back our land; that we want to be in charge of our affairs and resources?â€

The European Union (EU) has since lifted most of its sanctions, with just Mugabe and his wife, Grace, still subject to a travel ban.

Washington however refuses to recant, with Obama’s administration recently insisting that the Mugabe regime remains a threat to Americaâ€™s foreign policy interests.