SHEPHERD Tavaruva, a previous Masvingo Farmer of the Year winner, says he wonâ€™t be adding to his medal tally any time soon. 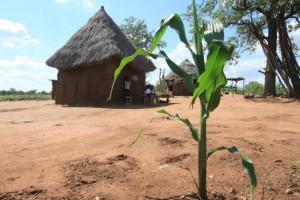 Zimbabweâ€™s worst drought since the new millennium is driving farmers like Tavaruva off the land. The 34-year-old, who won the provincial accolade in 2006 and 2007, now runs a security company where he says the risk is lower.

â€œDo I miss the land? Yeah, big time,â€™â€™ Tavaruva, son of Masvingo businessman Tanda Tavaruva, said in an interview in the provincial capital. â€œBut I am not going back until I have the right equipment â€“ a proper irrigation system which will enable me to survive these mad weather patterns.â€™â€™

Zimbabwe is losing farmers at the same time itâ€™s losing its industries, slashing economic output in a country with 80 percent unemployment and now facing its worst drought in more than three decades. This is, worsening hunger as the two sectors have traditionally worked in tandem, with farmers relying on industry for their inputs and equipment.

The Confederation of Zimbabwe Industries estimated industrial capacity utilization at 34 percent in 2015, down 23 percentage points from 2012 due to antiquated machinery and lack of capital. The government says itâ€™s now rationalizing farm ownership ahead of an audit of the land reform programme it claims saw some 300,000 families resettled on about 14.5 million hectares.

The bulk of Zimbabweâ€™s 2015/2016 crop has already been written off by the government which has now appealed for international assistance to help feed close to three million people facing hunger in the country. Â They are part of 15 million people threatened by an El Nino induced famine in southern Africa.

Even those farmers that replanted in January are facing a bleak harvest after most parts of the country went dry for about a month following the January rains, according to agricultural officials. The situation is worse in Masvingo province, where many districts lie in natural region five, the countryâ€™s worst agro economic region.

â€œI donâ€™t think we will get more than 20 percent of what we got last year,â€™â€™ said Elifas Mugari, the provincial agricultural extension specialist. “Most parts did not get enough rain during the first rains and in some parts there were no plantings at all,â€™â€™ he said, citing Chiredzi on the border with South Africa.

Masvingo has been one of the hardest hit provinces with more than half of the 25,000 reported livestock deaths and 90 percent of inadequate water supplies for agriculture, a statement released by the United Nations Resident Coordinatorâ€™s office last month shows. The crisis is beginning to impact children with the severely acute malnutrition rate forecast to increase in 2016 from 2.1 percent now versus 1.5 percent last year.

â€œThe eroded productive capacity of vulnerable farming households and the increased food prices have resulted in higher rates of malnutrition especially in the most food insecure districts,â€™â€™ the UN said, urging targeted assistance such as school meals for children to ensure they remain in school in areas like Matabeleland North where some 6,000 children are said to be “skipping classes, citing hunger and the need to help out with house or farm work.â€™â€™

The United Nations Childrenâ€™s Fund (UNICEF) which says it needs $21 million has so far raised just half a million dollars.

However recent rains which covered most of the country have materially helped livestock recover, Mugari said. That will help households hold onto their livestock and prevent fire-sales, he added. Sales at prices as low as $50 a head have been reported in southern parts of the country. Normally they would retail between $250 and $300 a head depending on the condition.

But in places like Chingwizi, near the sugar cane growing town of Triangle, drinking water remains scarce and some still walk as many as four kilometres twice a day to fetch water because of broken down boreholes.

â€œThe distance we have to cover, sometimes with babies on our backs, to get to water is great,â€™â€™ Mollen Jongwe said as she walked with a group of women to a borehole owned by a nearby farmer. “I have had to leave my three-month-old baby at home. Look how dirty I am. I have a big water problem.â€™â€™

Apart from the water problems, increasing hunger is also beginning to impact the education system. Some districts are reporting declining school attendance and concentration levels in classes.

Chikadzi Primary School in Mwenezi has seen an average drop of 10 percent in daily attendances as families struggle to raise fees and other support required by the schools.

Agnes Mashila, a communal farmer near Neshuro Business Centre in Masvingo, hasnâ€™t encouraged her daughter to return to school because she needs all hands to help feed the family of six who remain at the homestead. Like many farmers here, she has planted more sorghum than maize this year given the patchy the rains.

â€œThe rains came late and a few plants that survived the dry spell revived. (But) we donâ€™t know if they will make it,â€™â€™ Mashila said. The family, which is down to two cows, was only able to plough the fields this year after striking a barter deal with a local teacher to use his cattle in return for looking after them.

The hunger is now starting to be felt in urban areas as well, said Tavaruva who employs 15 people at his security company. He said the rural areas around Masvingo traditionally provided food for the town but this has been reversed this year, with people flocking to the town for food and support from relatives.

â€œPeople are leaving rural areas to come into town where there is massive unemployment and where we donâ€™t have any industries now,â€™â€™ Tavaruva said. â€œWhile the situation isnâ€™t desperate yet we are heading for trouble from August. People are surviving on their reserves now.â€™â€™