JOURNALISTS were Saturday left disappointed after they were prevented by government ministers from witnessing the arrival of 32 â€œtraumatisedâ€ Zimbabwean human trafficking victims who were arriving from Kuwait at the Harare International Airport. 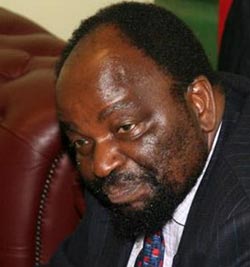 Over a dozen journalists who drove to the airport hoping to get face to face interviews with the women were made to wait for hours inside the airport building unknowing that the government officials who had also arrived to meet the women had in fact arranged to have the women whisked away outside the knowledge of the media.

The media was only left to hear the â€œhorrificâ€ accounts of the women through a snap press conference which was addressed by cabinet ministers within airport premises.

The ministers were part of an inter-ministerial team that has been set up by government to get to the bottom of the trafficking scandal, look into the affairs of those repatriated and those who remained in Kuwait voluntarily or otherwise.

Speaker of the National Assembly, who led a parliamentary delegation that facilitated the victimsâ€™ repatriation and further accompanied them back home, apologised to journalists for the â€œconfusion that took placeâ€ adding â€œit was not intentionalâ€.

He was however quick to say this was to state that the victims were entitled to their privacy.

Mudenda described the womenâ€™s experiences in Kuwait as â€œunsavouryâ€.

â€œI would not want to repeat these experiences because we would want to respect the privacy of these young ladies and those that will be free to open up through the qualified experts from the Ministry of Public Service and the Ministry of Health will do so to tell us the whole story,â€ he said.

Mudenda said a suggestion box would be created so that the victims could relate their experiences anonymously.

Mupfumira also added: â€œWe want to try with your (media) assistance to respect their personal dignity, confidentiality and privacy.

â€œ…The girls have been taken to their safe home for the night. We want them to rest and tomorrow (Sunday) we start the process of trying to assist them by giving the psycho-social support through the ministries of health and public service, as we might understand some of them might be traumatised, sick or whatever and we have a team of experts from social welfare and the medical profession to look at the girls, get their profiles and plans are being made to reunite them with their families.â€

It was revealed during the press briefing that one of the trafficking victims was pregnant although no further details were given on her condition.

The women had travelled to the oil rich Middle Eastern country to work as general labour.

However, things went bad when they started suffering abuses from their employers who either overworked them with little or no pay while some were forced into sex work.

They had their passports confiscated by the employers working in cahoots with employment agents who facilitated their travel to Kuwait making it impossible to travel back home.

Registrar General Tobaiwa Mudede facilitated the issuing of temporary travel documents to have them return home.

During the period between their escape from their employers and their eventual repatriation, the women lived under the benevolence of the Zimbabwean ambassador to Kuwait and the International Organisation for Migration.

However, relief only came when prominent businessmen Wicknell Chivayo and Philip Chiyangwa put funds together to have air tickets bought for them to return home.

Mumbengegwi denied the state had surrendered its responsibilities of taking care of citizens marooned in foreign territories to individuals.

He said the state has in fact facilitated the repatriation of several victims before, over and above the intense media campaign it has put up to alert other Zimbabweans who still had plans to go to Kuwait.