THE Lovemore Madhuku led National Constitutional Assembly (NCA) political party is mobilising Zimbabweans towards nationwide protests against the introduction of bond notes by the government. 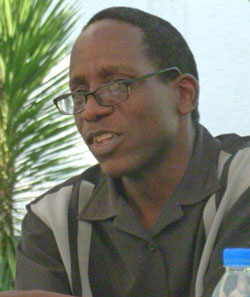 Reserve Bank of Zimbabwe (RBZ) on Wednesday announced that it was introducing bond notes as a way of easing the current cash crisis that has hit the country.

Governor John Mangudya said the bond notes will be inÂ $2, $5, $10 and $20 denominations, adding that their value will be equivalent to the US$.

Economists, opposition political parties and the general public feel that the Zanu PF government is reintroducing the Zimbabwean dollar which the country abandoned in 2009 after it was rejected by the market.

In response to the RBZ move, the NCA on Friday said it was launching the â€œNO TO BOND NOTESâ€ campaign with Madhuku saying all likeminded Zimbabweans should join to prevent Zanu PF from looting the little that remains of the foreign currency in Zimbabwe.

â€œNCA believes that this is one issue over which there must be unity regardless of political affiliation.

â€œThis is an issue that calls for countrywide street protests under the banner â€œNO TO BOND NOTES,â€ said Madhuku in a statement.

â€œThe NCA is requesting non -partisan personalities and organisations to provide a platform that will allow all stakeholders, including political parties, to organise and participate in a show of rejection through nationwide protests,â€ Madhuku said.

In February 2000, when the NCA was still a strong ally of the MDC, the then constitutional rights lobby organisation mobilised and influenced the rejection of a proposed national constitution in a referendum.

Since then, the NCA has led a number of protests with the police, at one time, bashing Madhuku leaving him for the dead.

NCAâ€™s ability to mobilise suffered in 2008 when Madhuku parted ways with the Morgan Tsvangirai led MDC party and that was after the latter had decided to form a coalition government with his decade long rival, Robert Mugabe of Zanu PF.

Madhuku said the introduction of the bond notes was going to benefit President Mugabe and his close friends.

â€œThey will destroy rather than build the economy. They will create a parallel economy in which only Zanu PF and other corrupt players flourish while the rest perish,â€ Madhuku said.