HARARE: No cash to donate to President Robert Mugabe's million man march on Wednesday? No problem: just hand over some orange juice. 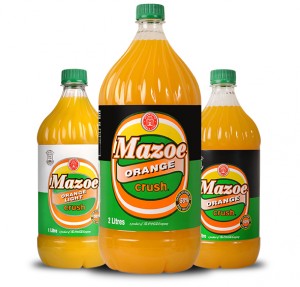 In a leaked letter soliciting donations from a bakery in Bulawayo, ruling party fundraisers have set out the things that they need to make a success of the march.

One of the requirements is apparently 5 000 litres of Mazoe, Zimbabwe’s iconic brand of dilute-to-taste fruit cordial.

BritainÂ on MondayÂ issued updated travel advice to its citizens in Zimbabwe ahead of the march, which will see hundreds of buses heading to Harare as Mugabe’s supporters demonstrate their support for the 92-year-old president in the face of growing social media criticism.

A foreign travel advice update posted to the UK government’s official website said the march would likely see “significant traffic disruption in the Harare area… you should avoid political activity including demonstrations and rallies.”

There are growing reports – still unverified – that government and mission boarding schools have been asked to provide buses to ferry supporters to the march.

Local government minister Saviour Kasukuwere reacted crosslyÂ SundayÂ to a claim on Twitter that villagers from the Zaka were to be forced to board buses to travel to the march, saying he would “check with the structures and correct that which must be [corrected]”. He said forcing villagers to board buses would be “unacceptable.”

Initially planned as a response to the unexpected support shown for an MDC protest in Harare onÂ April 14, the organisers of the march have stepped up their efforts in the wake of #ThisFlag, a growing protest against corruption and poverty in Zimbabwe that has so far been confined to social media. The protest was started by Harare pastor Evan Mawarire.

State media says the march will “reclaim the flag” from #ThisFlag sympathisers, who use Zimbabwe’s black, white, yellow, green and red national flag as a rallying point.

For years, Zimbabwe’sÂ flagÂ has been seen as the exclusive property of the ruling party with small flags sold on the streets for locals to display in their cars and homes.

On MondayÂ @channelzim, a grouping of Zimbabwe private radio stations, claimed that businesses in the southern city of Masvingo were being forced by ruling party youths to donate money towards the march.

In the leaked letter to the Bulawayo bakery from the Zanu-PF provincial youth league secretary for finance, donors were asked to provide diesel, flour, Mazoe, buses or cash. The letter was dated May 11 but only leaked this weekend.

Donors are promised a “letter of appreciation” once their contributions have been received.