The so-called million men march that was staged by the faction-ridden and crumbling Zanu PF regime on Wednesday, May 25,2016 was a spectacular flop. A few thousand people, most of whom had been commandeered to travel to Harare to attend the puerile and utterly purposeless march,turned up for this non-event. In fact, less than 5000 people turned up for this march, whose main agenda was to massage the ego of a nonagenarian who has run down the former jewel of Africa.hat a big yawn,the march was! 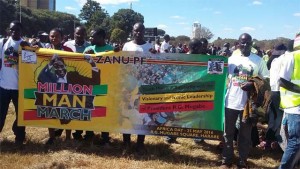 The MDC has always stated that Robert Mugabe can afford to rig the economy but he can never successfully rig the economy. In fact, the Zanu PF regime forced public schools and other institutions to provide transport for their thoroughly undeserved march. The following statistics from Mashonaland West province provide an insight into how how the fascist Zanu PF regime commandeered schools to provide transport for their uncalled and undeserved march :

When the MDC staged the “mother of all demonstrations” in Harare on April 14, 2016, no less than 20,000 people voluntarily took part in the historic march. No single school or public institution was commandeered to provide transport to ferry our supporters to the march. Put simply, the MDC never coerced and/or extorted money andÂ any other material resources from anyone.Zanu PF operates like a bandit commandist organization. For example, all vendors operating from Mbare Musika in Harare were forced and commandeered to participate in the spurious and fascist march that took place in Harare on May 25, 2016. The long- suffering people of Zimbabwe should resolutely refuse to pay homage to a brutal and totalitarianÂ political system that has pauperised and traumatized them over the past 36 years. We should say a very big NO to the Zanu PF dictatorship! We should stand up for our rights and refuse to be intimidated and threatened by an illegitimate and corrupt regime that is in the sunset of its life.

Zimbabwe has now reached a defining moment. Never again should we allow the brutal, extortionist and corrupt Zanu PF dictatorship to hold the people of Zimbabwe at ransom.Enough is enough! The people of Zimbabwe should appreciate the factÂ that the Zanu PF regime is now living on borrowed time. No matter how much repression and suppression is brought upon the toiling masses of Zimbabwe by the crumbling Zanu PF regime, the MDC urges the people to democratically and fearlessly fight for the establishment of an equal and egalitarian society in which the rights of all citizens are upheld and respected.

President Robert Mugabe, as expected, gave a thoroughly banal speech at the so-called million men march. The old man has nothing new that he can offer the people of Zimbabwe. He has superintended the total collapse of a country that used to be an economic giant in Africa. The address by Grace Mugabe was coarse and provocative. How can she contemptuously announce to the world that Robert Mugabe will rule from the grave? This woman should be taught a little bitÂ of decency. She shouldn’t be allowed to continue insulting the people of Zimbabwe. The time has come for all patriotic and peace-loving Zimbabweans to join hands and ensure that the Zanu PF illegitimate regime is lawfully and constitutionally removed from power. No other option will do.