On the occasion of World Press Freedom Day 2016, the Media Institute of Southern Africa (MISA), salutes all the champions of media freedom and freedom of expression across the world who have assumed the risks associated with such an effort. 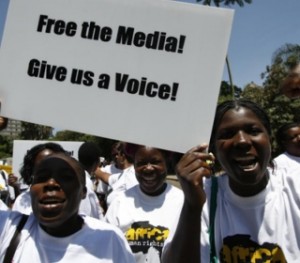 We wish to pay our deepest respects to all journalists who have lost their lives in the line of duty; our thoughts go out their families, friends and colleagues.Â  We also extend our prayers and solidarity to those who are incarcerated for simply seeking out and imparting information in a manner that is consistent with all rights and responsibilities. Their struggle is ours and we live in the hope that justice will soon visit them.
World Press Freedom Day each year presents an opportunity to evaluate press freedom around the world. Our state of the meia report for 2015, So This Is Democracy?, articulates the challenges and victories documented and analysed by MISA during the course of 2015.However, this year in particular we stretch our sights further back to May 3, 1991, when the Windhoek Declaration on Promoting Independent and Pluralistic Press was born in Windhoek, Namibia. We pay special tribute to the journalists who drew up the Declaration. They set up a beacon that illuminates the goal of conveying stories for honourable reasons, rather than for the narrow pursuit of power, wealth or religious orientation.

In a special effort to review 25 years of the Windhoek Declaration MISA issued a special publication in its efforts to answer the question: how far have we come since the adoption of the 1991 Windhoek Declaration? The articles are freely available to the media to extend their reach as a public information service to citizens in Africa. The articles can be accessed on a dedicated website whk25.misa.org as well as adapted content for online media and videos from young Africans.

The media are concerned with shaping public opinion, mediating the debate between the state and civil society. In addition the media acts as a watchdog over public processes and ensures that those who hold power do not abuse it in order to advance or promote their own individual interests. It is this sacrosanct mandate that makes free media a prerequisite to development and the promotion of democracy, human rights and good governance.

Democracy, we believe, is about empowering citizens so that they are able to actively take ownership of their own growth and development objectives. On a daily basis, media facilitate this activity and go on to give solid meaning to what exactly human rights, freedom of expression and media freedom are to the ordinary citizen.

It is also for this reason that MISA, through the African Platform on Access to Information (APAI) â€“ has been actively involved in the campaign on freedom of, and access to information. It is our strongest belief that information is power only when it can be productively used by the public and gives citizens the greatest opportunity to make decisions that enable them to question the sincerity and honesty of those who have been trusted with positions of power.

Whilst there has been a dramatic increase in the number of access to information laws on the continent â€“ 19 to date â€“ the right to access information on issues that affect peopleâ€™s livelihoods remains beyond the grasp of the majority of African people. It is heartening to note however that the Sustainable Development Goals formally recognize the need to â€œensure public access to information and protect fundamental freedoms, in accordance with national legislation and international agreementsâ€. Another advocacy victory, driven by of the APAI Working Group, sees Unesco recognising September 28 each year as the International Day for Universal Access to Information. Finally a day has been reserved to discuss, among others, the adoption and effective implementation of the national right to information laws in line with continental and international standards and obligations.

However, we remain extremely apprehensive about media policy developments in South Africa where proposed legislation, which the media sector and rights activists are railing against, includes the Broadcasting Amendment Bill, the Films and Publications Amendment Bill, the Cybersecurity and Cybercrimes Bill and the hotly debated Protection of State Information Bill (dubbed the Secrecy Bill).

In Zimbabwe, despite the adoption of a progressive Constitution in 2013 that guarantees media freedom and freedom of expression, the country has not seen any meaningful shifts in its media legislation or policies. Rather President Mugabe is hinting at plans to introduce more stringent monitoring of the internet and other social media platforms, in attempts to reduce the so-called abuse of the technology by Zimbabweans.

Presently the Parliament of Botswana has before it a proposed Whistleblower Bill that is aimed at criminalising whistle blowing to the media or any other person besides those directed in the Bill. In Namibia, the highest-ranking African country on press freedom indices, the Minister of Information and Communication Technologies (MICT) offers an access to information law as a trade-off for increased media regulation.

Free expression in Angola has been heavily curtailed. Despite worldwide condemnation, 17 young activists were jailed, some for more than eight years, for rebelling against the government after they organised a reading of US academic Gene Sharpâ€™s book entitled From Dictatorship to Democracy: A Conceptual Framework for Liberation.

The airwaves too, continue to be a contested terrain with an ever-growing reluctance to open up to alternative voices and players. This is inconsistent with, for example, the African Charter on Broadcasting which clearly states that â€œthe legal framework for broadcasting should include a clear statement of the principles underpinning broadcast regulation. This includes respect for freedom of expression, diversity, and the free flow of information and ideas, as well as a three-tier system of broadcasting: public service, commercial and community.â€

Even more worrying is the political rhetoric that has accompanied discussions on the role of the internet in publishing. The majority of governments on the continent have branded the internet as a tool for regime change. From Burundi to Uganda, Ethiopia to Egypt access to the internet and/or telecommunications networks is summarily blocked and at critical times when public dialogue and access is most important. These actions, in our view, represent, a profound lack of understanding of what the internet is, especially its democratising function.

It is MISAâ€™s sincere hope that on this occasion, all introspection, discussions and debates result in the good of journalism, greater freedom for journalists and ultimately a better informed and knowledgeable citizenry.