ZANU PF supporters and a handful of ruling party officials put on brave faces at Rufaro Stadium to listen to Vice president Emerson Mnangagwaâ€™s 30 minute May Day message as he addressed an empty stadium. 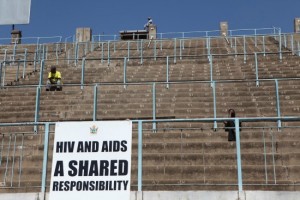 Just two this side … Part of the Rufaro stands Monday

The commemorations were organised by both the state and the Zanu PF backed, Zimbabwe Federation of Trade Unions (ZFTU), under the â€˜all-inclusive Workers Day celebrationsâ€™ banner.

State media reported that the government had organised the event â€œbecause it wants to revive the commemorations that had lost their lustre over the years due to the politicisation of trade unionsâ€.

The Zimbabwe Congress of Trade Union (ZTCU) held its commemorations Sunday at Gwanzura stadium which was also attended by the opposition political partiesâ€™ leadership.

Some people who were bussed to Rufaro stadium collected free t-shirts, two buns and an Alpha and Omega cascade drink and immediately left for their homes. This was despite ZFTU putting Dendera king Sulumani Chimberu and Jah Prayazh on the entertainment line-up.

Previously, such gatherings have been well attended especially during the era of former Zanu PF Harare provincial youth leader, Jim Kunaka, who used to force vendors trading at Mbare Musika and Mupedzanhamo flea markets to temporarily close their shops.

Kunaka, who was fired from the ruling party, has since joined the newly formed Zimbabwe People First led by former VP Joice Mujuru.

In his short address, Mnangagwa congratulated workers who have remained â€˜committedâ€™ to their jobs despite difficult times which have seen many go for months without being paid.

ZFTU was started by Joseph Chinotimba and other war veterans in the early 2000s as a counter to the ZCTU which gave birth to the MDC in 1999. At its formation, ZFTU led many state sponsored demonstrations and company invasions in Harare claiming to be fighting for workersâ€™ rights. They forced management to reverse job culls and to raise wages. As this was happening, the state ensured ZCTU was not allowed to stage any demonstrations.