For months we have been asking ourselves, where does Chinamasa get the money to pay salaries and the 2015 bonus? We should have known that they could not print money and therefore that what they were doing was robbing the bank! Now that the bank is empty â€“ they are going to print money, simple really. 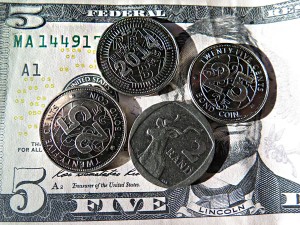 Biti said it all â€œwe eat what we killâ€. The fundamental principle is only to spend what you earn. If you go beyond that, you are in trouble no matter who you are. So what has happened since 2009?

All figures in US dollars in billions or a fraction thereof. 2008 conversion from ZS.

You can see from this that Chinamasa has been deficit financing the budget since mid 2013 when Zanu PF came to power. The deficit in 2013 came about after Mr. Mugabe ordered an increase in Civil Service salaries by one third together with other costs that had not been budgeted. Although the surplus revenues from 2009 to 2012 were small, they represented a balanced budget minus debt servicing which was not taking place.

The question is where did Chinamasa get the money to meet the deficit? Partly by simply running up credit and increasing the total debt of the State and partly with Treasury Bills. The Ministry of Finance released a schedule of Treasury Bills issued up to the 31st December 2015 and this showed $2 billion owing to local creditors. Remember that a TB is just an IOU â€“ a promise to pay, signed by the Minister or the Governor of the Reserve Bank.

A worrying feature of these statistics is that many think they are not reliable and that the State has been manipulating the numbers to meet the IMF targets under the Staff Monitored Programme. Private estimates put the total amount of TBâ€™s in the system at much higher figures â€“ certainly if I tally the total amount of debt being treated in this way I come to nearly $5 billion.

But in the end you cannot rig the economy. In the first 4 months of 2016, the banking system has come perilously close to collapse and we need to ask why? What has changed so drastically that an otherwise sound financial institution like CABs suddenly has no money? You find no credible explanation in any of the statements made by the Minister in recent days or in the Reserve Banks statements. Sure they are trying to make the case for pointing to illegal outflows, the massive budget deficit and money laundering using neighboring States currencies but these just do not cut ice.

I think that the real reason is that they have been robbing the bank. In 2015 the RTGS system (money transfers through the banks) handled $45 billion dollars – $170 million a day. This demonstrates the speed at which money circulates in any economy. Now what happens in this system is that when you fill in an RTGS form at your local bank, the bank processes the documentation and sends it, with a wire transfer of funds from YOUR account, to the Reserve Bank. In 2015 your money sat there for an average of three days before onwards transfer to your supplier/creditor or other beneficiary. 3 days at $170 million a day â€“ average money in the account at the RBZ $500 million.

Now I believe that the only credible explanation of the sudden cash shortage is that when Chinamasa cannot balance his books at the month end and needs cash, he has been dipping into the RTGS account at the Reserve Bank â€“ replacing the funds with a simple IOU. This is patently illegal and puts every bank at risk because, when the commercial bank takes real dollars out of your account for transfer you expect them (you trust them) to deliver at the other end.

In January this year, the RTGS system slipped slightly â€“ a few days additional delay and no one really complained, in February it got worse, in March and April still further delays until the whole system was close to collapse â€“ suppliers asking where their money was and local account holders angry and perturbed that, without explanation, their payments were being delayed.

Delays right now are over one month in many cases and on top of that the Reserve Bank has begun â€“ way before the announcement last week, to prioritise payments to protect essential supplies. Fuel is number 1 (after the needs of Mr. Mugabe) and University fees are at the bottom.

The first line of defense by the Banks was to bring back to the country the contents of their NOSTROW accounts â€“ up to now, about 10 per cent of all deposits were being held outside the country to facilitate real time transfers. This interrupted the supply of new currency from the United States and began to lead to local cash shortages. To exacerbate this, the Reserve Bank announced reductions in the level of daily cash withdrawals â€“ soon overtaken, like last weekâ€™s announcement, of a limit of $1000 a day from any account.

The economy has voted against the Zanu PF led government and this is reflected in the rapid and dramatic decline in revenues to the State. Wary of the Banks after the debacle in 2014 when 9 banks failed, people are not banking and are taking their money out of the banks as fast as they can. This puts the entire banking industry at risk â€“ no matter how well run or how strong their balance sheets.

Now to cap it all, the RBZ has announced that they are going to resume printing money. They have given us two months notice which is like advising soldiers that there is an ambush waiting for them down the trail. Anyone walking into such an ambush knows how it can be turned against you with disastrous results.

When you print money you are creating money out of nowhere. It only has value if it is trusted and is convertible â€“ either into goods at face value or into other currencies at market value. This is known as the â€œExchange Rateâ€. The effect on the State is to create money that has not been collected in the form of Tax. Bond coins, was one thing â€“ small change in this game with little impact except convenience as they are accepted at all banks as US Dollars. Bond notes is another ball game altogether.

Already you can get a premium for US dollars cash in the market. When the Bond Notes are spewed out of the ATMâ€™s in six weeks or so they will immediately be presented to the banks and other retail outlets for conversion into goods or foreign exchange at parity to market rates. As soon as this becomes impossible then the market value of the new notes will begin to devalue and there is nothing that the State can do about that except watch the process. Once the banks cannot convert your Bond Notes into real US dollar notes at face value, they are going to be almost worthless.

The effect will be to make everything worse. Everybody being paid in Bond Notes (irrespective of the currency in which their accounts were credited) will experience a sharp decline in their incomes. The informal sector with their money changers and trans border trading activities will take over the real markets. The decline in State revenues will accelerate still further and the economy (the formal sector) will find it almost impossible to operate.

The answer to all of this is a change of government and new leadership â€“ nothing else will achieve anything.