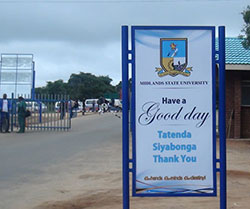 The three were suspended on April 11 after the institution accused them of breaching Ordinance No.2 of 2000 for allegedly posting a WhatsApp message urging students to protest.

The trio were barred from setting foot at the MSU campus pending their appearance before a disciplinary committee. They are likely to miss all their end of semester examinations which started Friday.

The WhatsApp message purportedly authored by the trio called for a massive protest against poor living conditions at Zvishavane campus, existence of gold panners who pose the risk of spreading HIV and Aids among students and high temperatures, shortage of water and electricity.

But through their lawyers, Chitere, Chidawanyika and Partners, the students who deny authoring the alleged message are seeking an order against being barred from campus. The students want to be allowed to sit for their examinations.

They also argued that the suspensions were open and vague and did not clearly state the date of the hearings. They also accused the university authorities of victimising them on unfounded allegations.