HARARE â€” Zimbabweans on Sunday castigated the government for failing to provide jobs and protect its people saying this has forced some of them to go to other countries to seek greener pastures where they sometimes work in horrendous conditions like 32 women who returned home from Kuwait on Saturday. 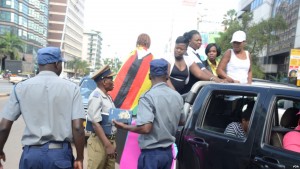 Ordinary people, experts and some opposition parties told Studio 7 that poverty levels in Zimbabwe have reached alarming proportions and this is forcing people to do anything an effort to eke out a living.

Movement for Democratic Change secretary-general, Douglas Mwonzora, said in that process Zimbabweans ended up being taken advantage of by unscrupulous people like what happened to the 32 women who were enslaved and sexually abused in Kuwait.

He said Zimbabweans would not be traveling abroad in search of jobs if Mr. Mugabe and his party had fulfilled their promise to provide 2.2 million jobs in the run-up to the 2013 general elections won by Zanu PF.

Economic commentator, Masimba Kuchera, said while people were supposed to carefully consider jobs offers in foreign countries, locals were in such a desperate situation that they could take an offer anywhere.

He said it was worrying that government was failing to discharge its mandate of protecting citizens at home and abroad.

“It unfortunate they have allowed such a thing to happen. I think the government must be able to ensure that its people are safe wherever they are,” said Kuchera.

Harare resident, Memory Mbondiya, also said that it was sad that locals were abused and treated like slaves in other countries because the government was failing to provide jobs.

She claimed that government was responsible for all the serious problems Zimbabweans find themselves in and said she believed the situation was more serious than what is being reported.

“We can’t celebrate the return of these few women, how about others still stuck in Kuwait, what is their condition â€¦ We want the government to take action and bring them back home,” Mbondiya said.

Another Harare resident, Denford Ngadziore, was equally angry with the government’s failure to create employment for citizens.

He said human trafficking syndicates were taking advantage of Zimbabweansâ€™ desperate situation to recruit and market them abroad.

“Zimbabweans are desperate for survival. Zanu PF and Mugabe are responsible for the Kuwait mess. He must apologize or resign,” said Ngadziore.

Employersâ€™ Confederation of Zimbabwe president, Josphat Kawema, told workers at an International Workersâ€™ Day event in Harare on Sunday that in as much as industry wanted to employ people, it can no longer do so as it was almost dead and buried.

Kawema said as a result most people were poor and hungry. “When you are hungry you end up doing anything including stupid things,” he said.

But for another Harare resident, Yvone Musarurwa, some people in Zimbabwe are surviving in worse conditions than those in Kuwait.

She said it was puzzling that the government had allowed commercial sex workers to operate freely while criminalizing street vending.

A total 32 Zimbabwean women that had been trafficked to Kuwait were brought home by a parliamentary delegation led by National Assembly speaker, Jacob Mudenda.

They were welcomed at Harare Airport by several government ministers, including Foreign Affairs Minister, Simbarashe Mumbengegwi, who said the government was committed in protecting its citizens at home and abroad.

Mumbengegwi made the comments despite the fact that his government had failed to pay for travel costs for all the 32 women back to Harare.

He admitted that the International Organization for Migration had bought air tickets for 25 women while a Zimbabwean businessman paid for the reminder.

“Itâ€™s sad that government could not even transport the ladies home,” said Ngadziore.