In 2008, Nechavava Ward 16 in Buhera Central Constituency witnessed violent conflicts like many of the rural communities that suffered high levels of political intolerance. As part of Heal Zimbabweâ€™s community resilience and peace building initiative, members of the community formed Batanai peace club which would have the mandate of encouraging peaceful co-existence in their area. Heal Zimbabwe trust trained the peace club on conflict mapping and mediation. 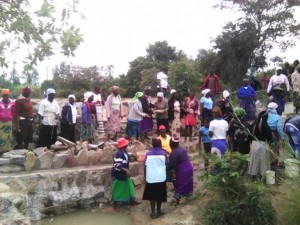 After the training, the Peace Club came up with an action plan to address exiting conflicts in their areas. The plan, identified issues or conflicts that affect the community and key stakeholders to be engaged to address this. A suitable neutral platform was then decided by the Peace club to bring parties to the conflict together and engage in dialogue. Batanai Peace club in Nechavava ward 16 of Buhera identified a dam wall construction as the best collaborative neutral platform where community members worked together and discussed critical issues affecting the community including conflicts.

On Saturday 21 May 2016, close to 260 Nechavava community members that included man, women, girls and boys gathered at the dam construction site to provide more importantly their manual labour to the work to construct a water body that will go a long way in easing their water woes but equally important to engage with their ward councillor, Mr. Thomas Matsenhura and Mr. Enos Garikai who is Headman Nechavava on important issues affecting the community. One of the conflicts discussed was that most services to that ward including food aid distribution was not being done at a central venue due to inaccessibility of the more central place.

To address this issue, the Peace club had taken the initiative to carry out a road repair that would allow a more central place accessible in preparation to engaging their leadership. The collaborative neutral platform –nhimbe-was attended byÂ Â  11 Village heads from the area. In his speech, Councillor Matsenhura highlighted the need for peace and development in the area.â€Peace and development are very important in our area and through this nhimbe that has been organised by Batanai peace club, we have discussed that which makes us one, it is healthy to dialogue whenever we face problems, but I like it more if we do so productively like we did todayâ€™â€™, he said. He also encouraged the peace club to plan more of the nhimbe activities since they bring peace and development in the area.

Headman Nechavava also appreciated the people who had turned out for the nhimbe urging them to shun violence and reminded them thatÂ  it created enemity amongst kinsman in the past. He called for more platforms where violent conflicts areÂ  denounced and unity is propagated. Every community member must be educated on the need for peace and development since it has proved that once there is unity, communities can champion development, he said. In his closing remarks, Headman NechavavaÂ Â  noted that because of the pledge of peace made by everyone on the day, those who would commit acts of violence in future should not be surprised if they are brought before his community court and face trial.

The nhimbe is one among many activities that are carried out by HZTÂ  community peace clubs to detect and diffuse conflict as communities slowlyÂ  brace up for another plebiscite in 2018 with hope forÂ  a peaceful environment.