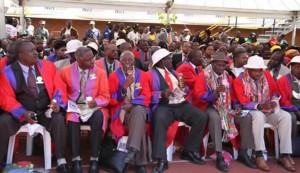 It is in pursuit of the realization of such a role that Heal Zimbabwe Trust (HZT) in partnership with Zimbabwe Civic Education Trust (ZIMCET) conducted a Traditional Leaders Capacity building workshop in Masvingo at Nyuni Mountain lodge on the 18th of May 2016. The meeting was attended by 29 traditional leaders (4 women and 25 men) mainly village heads from Bikita and Zaka. The objectives of the workshop were to raise awareness on the roles and responsibilities of traditional leaders as enshrined in chapter 15 of the constitution as well as raising awareness on the National Peace and Reconciliation Commission (NPRC) and the Zimbabwe Human Rights Commission (ZHRC).

The workshopâ€™s major highlight wasÂ Â  the roles and responsibilities of Traditional leaders as stipulated in Chapter 15 of the constitution where they play a pivotal role in the protection and promotion of human rights in their communities. They were also educated on the roles and functions of the NPRC and the role of Traditional leaders in the promotion of peace and reconciliation in their communities.

The traditional leaders bemoaned the interference of political parties in their work and highlighted that in some cases they are given directives by politicians to influence food assistance beneficiary selection in a partisan manner. Some indicated they are at times instructed to mobilise villagers for development work or benefits on political party lines.Â Â  This they argued has compromised the discharge of their duties in their communities.

The traditional leaders however agreed on a community plan of action that include spreading the message of peace through collaborative neutral platforms (nhimbes) and community dialogues in their respective communities. This would help in the promotion of peaceful co-existence in local communities. The community collaborative neutral platforms (Nhimbes) and Community dialogues are some among many activities used by communities working with Heal Zimbabwe to enhance social cohesion and building social capital as well as spread message of peace tolerance.