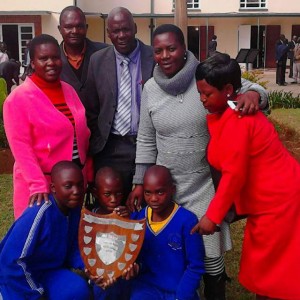 Dynamite comes in small packages, which proved to be true for the sharp minded juveniles, Ladislous Chinhara, Makanaka Mushayabasa and Tinotenda Chikuku .The youngsters displayed a five star performance, that mesmerising hundreds of audience packed to witness the national completion held at Cecil John Rhodes primary school hall.
In typical biblical David and Goliath story the team of three Masvingo junior scholars, clad in simple green track suites, defeated their optimistic urban based competitors in categories such as cultural heritage, history, science environment as well as general knowledge.
â€œYes, for the first time in history of the National Primary Quiz competitions the title has landed in our hands. This is through perseverance and dedication. We started partaking in these competitions as far back as 2002. We lost last yearâ€™s competition by a slight margin. Although we were deeply hurt after losing by one mark, we did not quit. We thank God that today we managed to conquer,â€ said the seemingly jovial teacher Sibanda.

â€œOur visits to Physical or â€œtangible cultural heritageâ€ such as historic places, monuments and artefacts galleries could have contributed to our victory. We would want to maintain the earned status. We are not going to relax; we are going to continue working tirelessly so that next year we attain the same resultsâ€, she said.

The only present rural school, Madyangove team won the quiz, beating four of the nations â€˜Aâ€™ class schools such as Manicaland based St Melleray and the host Midlands Province champion, Cecil John Rhodes that came second and third positions respectively.

Three quiz captains from the optimistic CJR, Mt Melleray and Chinembiriâ€™s cheeks glistened with tears as they received their accolades.

Others schools that competed were Bulawayo based Khumalo primary and Chinembiri primary school from Mashonaland region.